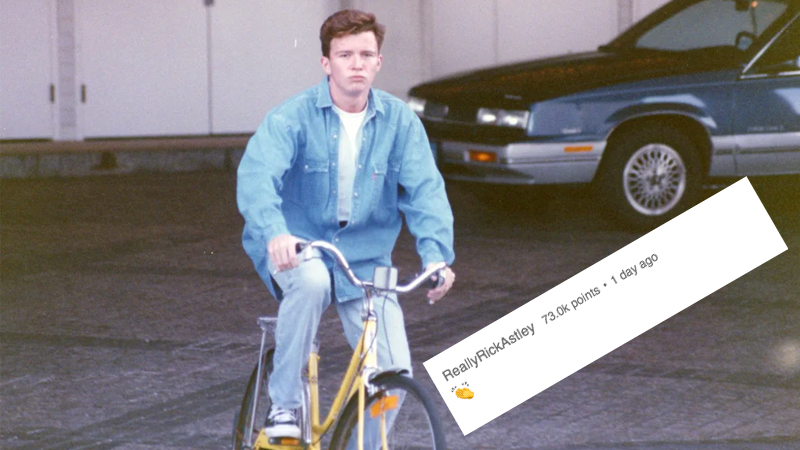 To paraphrase Eminem, this is no movie, there’s no Mekhi Phifer.

And to quote the same song directly, “You only get one shot, do not miss your chance to blow. This opportunity comes once in a lifetime.”

We can only assume that “Lose Yourself” plays 24/7 in the mind of Redditor theMalleableDuck, who knew what to do when the real Rick Astley posted an old tour photo on Reddit this week.

Astley, who shared a photograph from his first tour in 1989 in the /r/pics subreddit, should’ve seen it coming.

I’ve found a few funny memories during lockdown. This is from my 1st tour in 89, backstage in Vegas. from r/pics

Seeing the post, theMalleableDuck posed as a devoted fan that met Astley backstage when they were 12. Of course, when you click the link in the comment, you’re not taken to a photograph of a Rick and this young MalleableDuck.

Astley, for his part, seemed to appreciate the Rolling (he must be used to it by now).

Astley, who has since benefited from the meme, which has kept his name alive on the internet decades after the song left airwaves, has no qualms with the prank. In 2016, he said that he doesn’t find the prank offensive or “negative.”

“I don’t see it as negative. If someone had messed around with it and cut it all up and made me look stupid — I mean I look pretty stupid anyway in that video — if it was nasty, then I’d be probably a bit pissed off, but it’s not,” Astley told Rolling Stone. “”It’s like, ‘We’re choosing that video because it’s a full-on Eighties, cheesy video.’ There’s no getting away from it now and I’ve got to own it because if I don’t, it’s like being petty.”

Rickrolling has been an internet tradition since the mid-00s. In 2015, YouTuber Hot Dad claimed to have created the Rickroll. In the video, he claims that he Rickrolled a local radio station in a prank call in August 2006.

Do As I Say Not As I Do, Mark Ruffalo Edition
15 Of The Funniest Ways Bernie Sanders Is Asking For Your Support
lugia helps a lot 🙂
Bojack Horseman Is Coasting On The Backs Of Memers In New Template