The Capitol Hill Autonomous Zone (CHAZ), also known as the Seattle Autonomous Zone, refers to a six-block region of Seattle’s Capitol Hill neighborhood outside the East Precinct of the Seattle Police Department that has declared itself separate from the United States government; though, has not been recognized by local or federal governments. Activists established the area during the 2020 George Floyd Protests against police violence and brutality, using police and road barricades left behind from standoffs between law enforcement and protesters. While the city has not recognized the area, protesters use the Seattle Autonomous Zone as an activist encampment with food, water and tents.

On June 8th, 2020, protesters declared the Seattle Autonomous Zone after police abandoned the area to de-escalate interactions with protesters. Before the establishment of the Autonomous Zone, police used tear gas in an attempt to clear the region.

That day, reports of the autonomous zone began appearing online. For example, Twitter user @anarchomastia tweeted, “People have established a 6 block autonomous zone in cap hill. Walled off with staggered barricades with teams setting up bathroom distributing food and water, disabling security cameras. This is revolutionary praxis.” The Instagram account @decolonizethisplace shared the tweet with a photograph of a road barrier that reads, “You are now entering the Cap Hill Autonomous Zone.” The post on Instagram received more than 12,000 likes in less than two days (shown below). 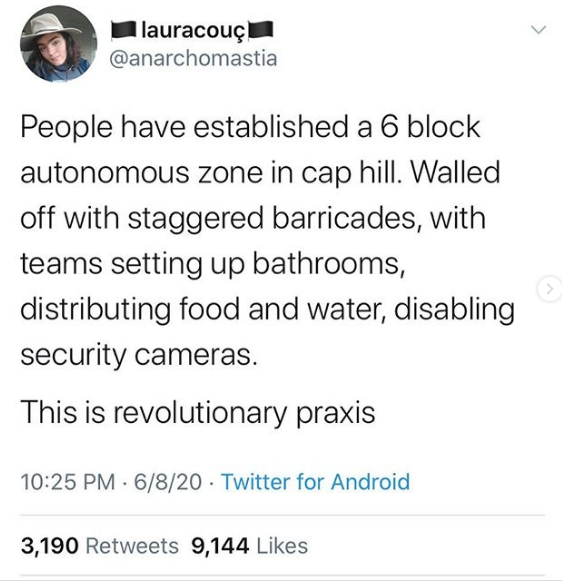 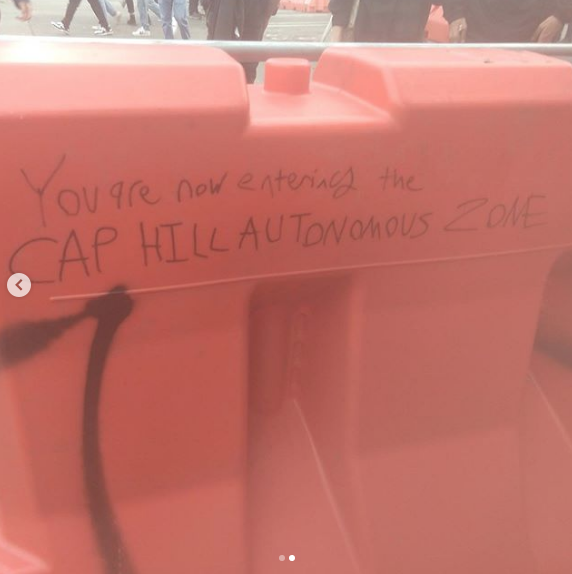 Twitter user @AGarlandPhoto tweeted a video of the areas, writing, “Activists build their own barricades to protect themselves” (shown below).

Activists build their own barricades to protect themselves pic.twitter.com/ilGct7ZVQ6 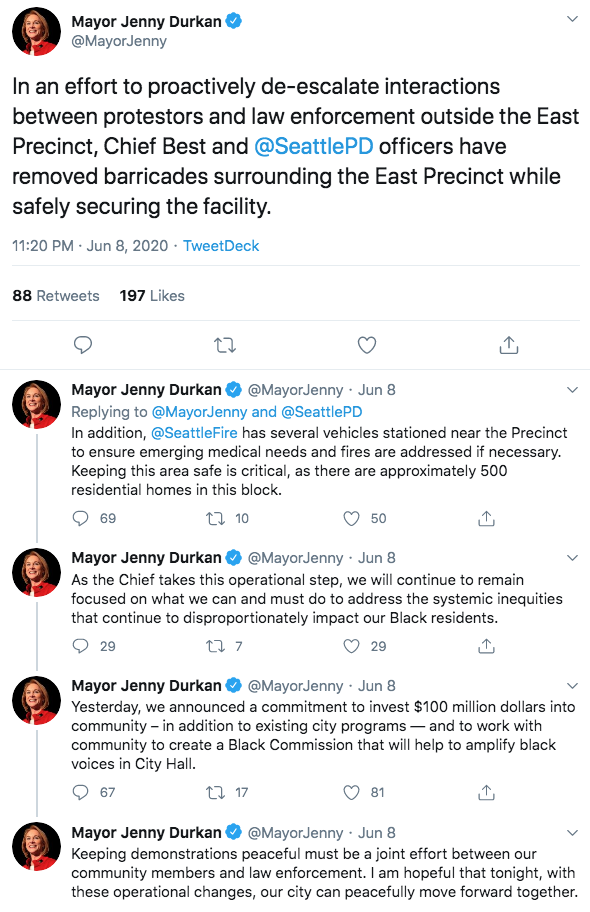 Following reports of the Autonomous Zone, people online began posting images of maps, detailing the extent of the area. Twitter user @grnr_s tweeted one with the caption, “If you like the mapping status of the toppled/dumped statue in Bristol, you’re gonna like this: ‘Capitol Hill Autonomous Zone, an autonomous area in central #Seattle as of June 9th. Notable due to historical significance'” (shown below, left).

Others posted images of the area. Twitter user @historyofarmani tweeted, “Capitol Hill Autonomous Zone in Seattle. 6 blocks retaken back for the people. ‘You are now leaving the USA’ when you enter. Long live the fucking revolution.” The tweet received more than 33,000 likes and 8,800 retweets in less than two days (shown below, center). 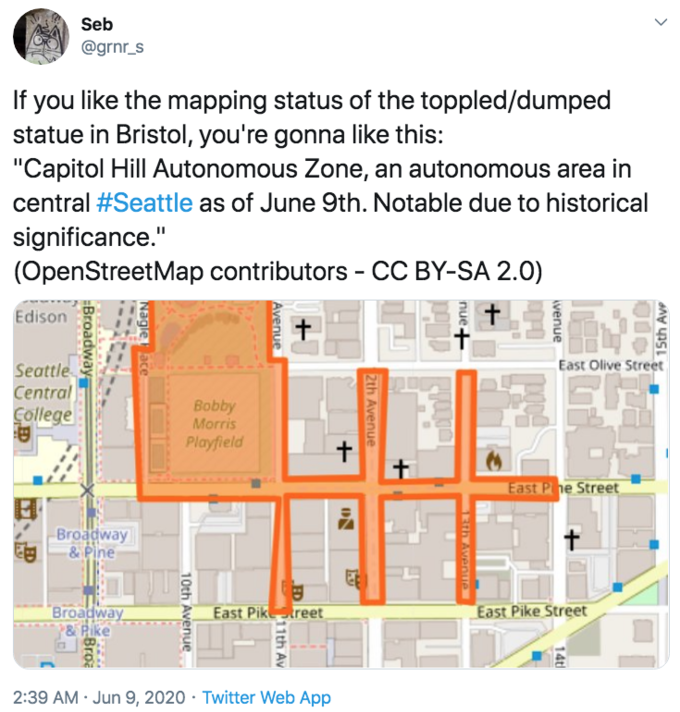 Font Text” class=” kym-image image-auto-link” id=”photo_1860502″ title=”Capitol Hill Autonomous Zone in Seattle. 6 blocks retaken back for the people. “You are now leaving the USA” when you enter. “> 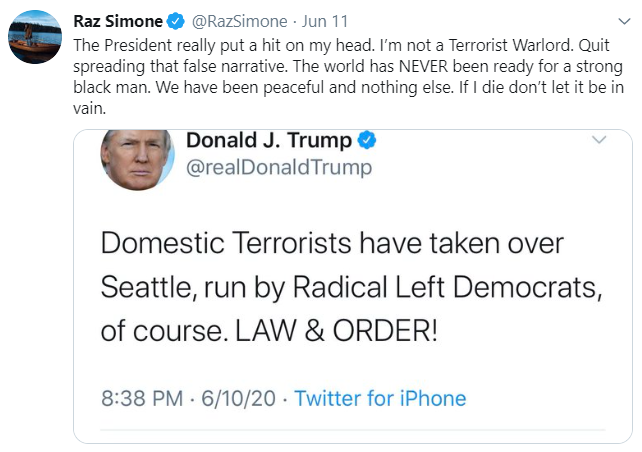 That day, screenshots of old tweets attributed to Simone which included derogatory slurs for homosexuals began circulating on Twitter, leading Simone to claim he was “hacked” and that people were “creating fake tweets from my page somehow” (shown below). 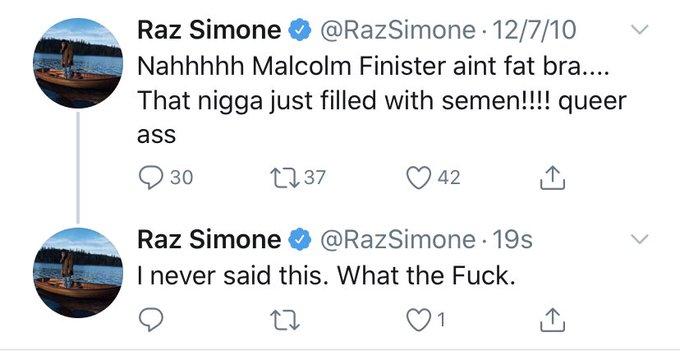 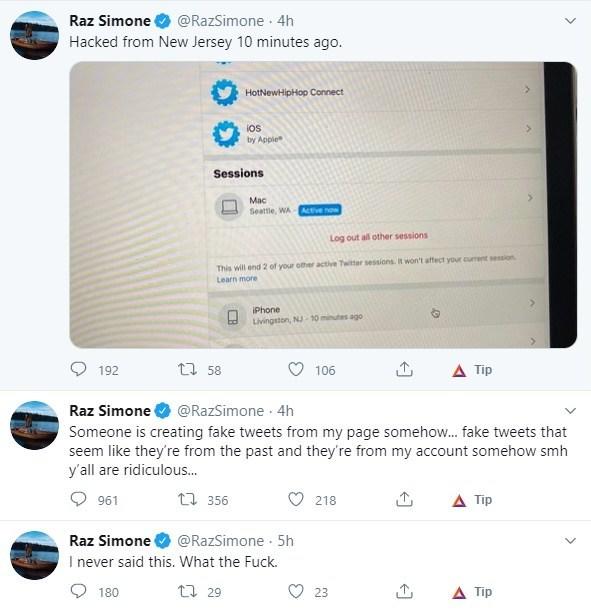 On June 12th, 2020, the New York Post published an article titled “Rapper Raz Simone accused of being ‘warlord’ in Seattle’s police-free CHAZ.” The article made mention of reports that Simone had “been patroling the CHAZ with an AK-47 and a handgun.”

Made with poor gimp skills
I smell like gamer
Ouch, I feel pain for the man.
Somebody get Donald the duck to the AA