After going more than seven months without an update, any new content and a lack of communication from the game’s publisher, Rockstar Games, players in Red Dead Online have begun protesting in-game by dressing up their characters as clowns and flooding lobbies around the world.

As frustration continues to mount, players are hoping this new unconventional approach will get the developer’s attention after receiving little in the way of news for any future content for the Western action-adventure multiplayer game since December 2019’s Moonshiners update. Although the game gets a weekly update each Tuesday, almost all of these have consisted of things like free items and discounted products, such as 30 percent off canned beans.

In early July, the Red Dead Fashion subreddit kicked off this trend as part of its “Traveling Circus” fashion contest for the month with a post that read, “Since we’re all clowns for believing we’ll get an update, it’s fitting that we dress up as them in-game too!” Since the post went up, disgruntled Red Dead Redemption players have taken the theme and run with it, dressing up their in-game characters with a multitude of different clown outfits and organizing digital flash mobs on Discord, Reddit, Twitter and more.

Over the course of the weekend, one such player, OnlyPVPCat, put together a flash mob by recruiting community members on Twitter and Reddit as a way to “help to get some attention to this game from Rockstar Games.” On the RDO Discord server, which has thousands of members, players have also voiced their support for the digital protest, with one admin telling Polygon, “Rather than let it turn negative or nasty, which in-game communities things often can, I thought I’d turn [our protests] into something a bit more fun or even wholesome in a way.”

How about making a flash mob in #RedDeadOnline this weekend? Wearing the clown outfits in videos/while on streams. This can help to get some attention to this game from RockstarGames. Are You in HazardousHDTV JoblessGarrett AustinBMX155 Jowers97 ZumieFiasco?#RedDeadClowns

The overall concept behind the use of clowns stems from the community’s tendency to refer to both Rockstar devs and themselves as clowns for expecting an update or any form of communication as to what’s in store for RDO in the future. Aside from the meager weekly updates, Rockstar has been near-silent on any planned DLC or content updates, despite the game now lacking anything new for players to do in over half a year. This community-driven event comes in the wake of a rise in clown memes in recent years, which have become a popular symbol to represent absurdity online, as seen in Clown Pepe, Putting On Clown Makeup and the many related Joker memes, such as Dancing Joker.

Rockstar has yet to comment on the latest clown phenomenon, as well as the increasing frustration among the community that’s been growing for months now. Until that does happen, players plan to continue filling up servers and lobbies with clowns en masse, taking over towns and killing NPCs, hijacking trains and boats or generally wreaking havoc as much as possible.

The Red Dead Online Community Twitter account and several others are currently organizing another massive, cross-platform meetup of clown protesters this upcoming Monday, so expect to see more of the same in the near future until the devs finally give some insight into what’s going on with the game behind the scenes. 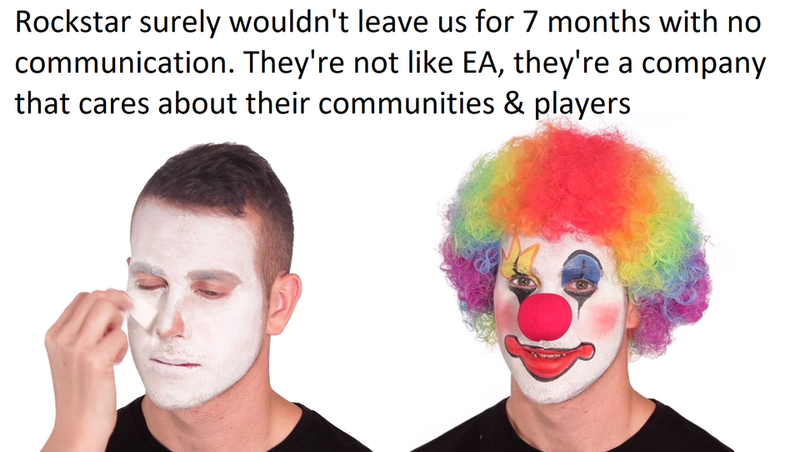 Wtf is nick doing with this poor sponge?
😒😒
no title
Enjoy This Tapdancing Toucan, Won't You?