The 2020 Republican National Convention refers to the 2020 edition of the American Republican Party’s traditional pre-election convention in which they nominate their Presidential candidate, which in this case, is Donald Trump. The event was hosted primarily at the Charlotte Convention Center, though many speeches were given remotely due to the coronavirus pandemic. In addition to prominent Republicans and members of the Trump family, the convention also featured speeches from controversial social media figures such as Nick Sandmann, aka the Covington Teen, and the McCloskeys, the couple from the Missouri Gun Couple incident.

On July 20th, 2020, the Republican National Committee selected Charlotte, North Carolina as the city which would host their National Convention. The party forewent adopting a party platform in favor of blanket support for Trump’s agenda. The event is taking place between August 24th and August 27th. President Trump will accept his nomination from the White House.

The first night of the convention saw speeches from Nikki Haley, the McCloskeys, Donald Trump Jr. and his girlfriend, Kimberly Guilfoyle, the latter two of which led to jokes that Trump Jr. and Guilfoyle were possibly on cocaine. Trump Jr.’s eyes appeared red and swollen, leading to mocking speculation that he was high. User @KirkAcevedo quoted Scarface along with a clip of Trump Jr.’s speech, gaining over 780 retweets and 2,800 likes (shown below, left). User @Jar0fGhosts speculated that an Instagram post Trump Jr. made prior to his speech in which he held cans of Red Bull were meant to give an explanation about his performance (shown below, right). The numerous speculative posts about cocaine use on the first night of the convention led “cocaine” to trend on Twitter that evening. 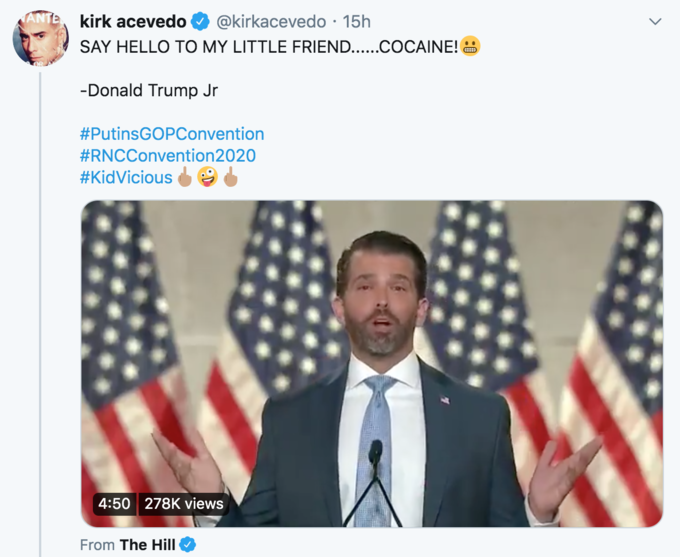 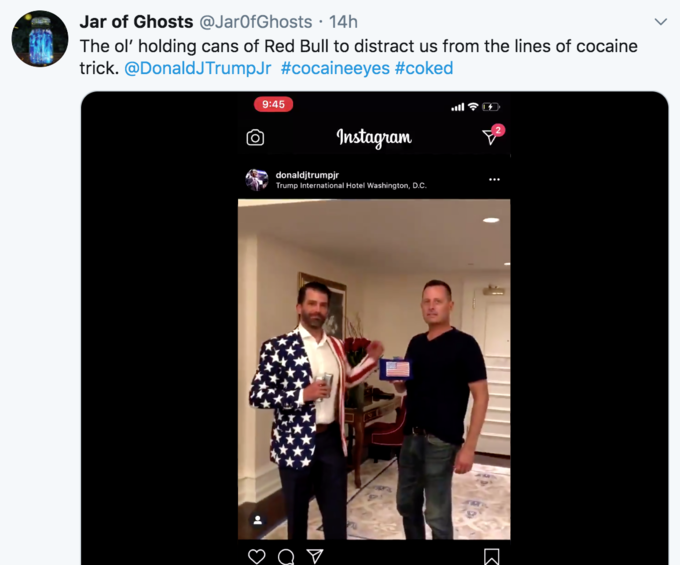 Kimberly Guilfoyle’s RNC Speech refers to Trump campaign official and former Fox News host Kimberly Guifoyle’s August 2020 Republican National Convention Speech made on night one. The speech was criticized on Twitter for her tone and for her passionate delivery. Twitter user @TeamTrump shared a video of her “full remarks” which received over 1.4 million views and 4,500 likes in a day (shown below).

That same evening, Twitter user @albz reposted a clip of her speech and added, “I have watched enough Looney Tunes to know this is the moment where a piano drops from the sky” (shown below, left). The next day, The New Yorker reposted their article on Twitter saying, “On the first night of the Republican National Convention, Kimberly Guilfoyle, a former Fox News personality turned Trump campaign official, delivered a shouting speech whose tone might be described as high-key dystopian” (shown below, right). The tweet gained over 580 likes in a day. “Rita Repulsa” trended on Twitter that day as users compared the speech to that of the Power Rangers villain. 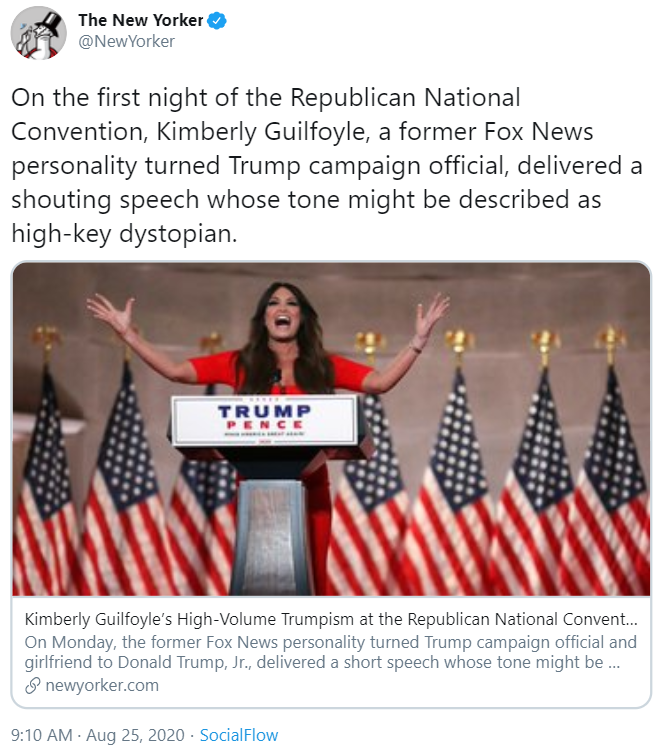