After the arrest of Jeffrey Epstein’s notoriously elusive associate Ghislaine Maxwell, the internet has been waiting to see if/how Maxwell will meet the same mysterious, untimely end as her alleged partner in crime. When a satirical article claimed that Maxwell had contracted COVID-19, it went viral, as people were all-too-ready to believe the fix was in.

The story was started by the Brown Valley Observer, a website whose “About Us” section reads, “This is an entertainment website written to satirize news events, politics, and popular faces and ideas, and to provide commentary on social attitudes and trends.” Nevertheless, its article titled “GHISLAINE MAXWELL HAS TESTED POSITIVE FOR COVID-19 IN NEW HAMPSHIRE JAIL, DOJ REPORTS” looks fairly legitimate aside from some copy-editing errors. The article includes made-up quotes from U.S. Department of Justice officials to give the story an air of truth. One quote reads:

“Once she was in custody and began to relax, officials noticed that she was displaying symptoms related to coronavirus including watery eyes, cough, and mucus. She stood to be tested regardless of symptoms while in custody, but her symptoms and the profile of this particular case caused local officials to speed up the testing practice,” a release from the US Department of Justice stated.

The post spread widely on Twitter, where it was shared uncritically by multiple users, drowning out the few pointing out the piece was satire. A phony BBC headline with the same story supposedly published on “July 11th, 2020,” circulated as well. Snopes debunked the claim. 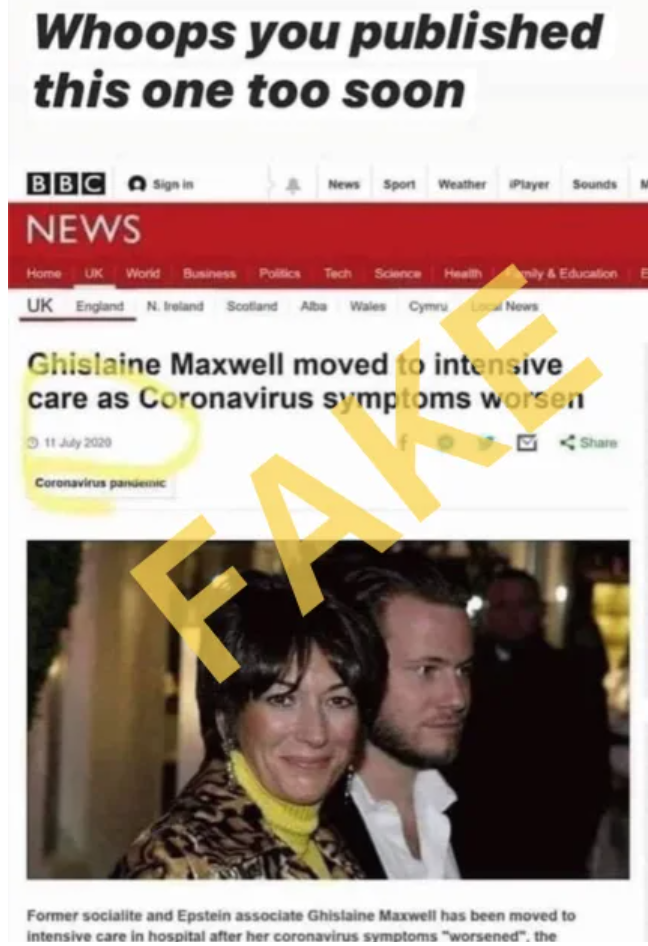 Maxwell is charged with procuring and sexually trafficking underage girls for Epstein, whose infamous “little black book” allegedly contains the names of several powerful people who would be implicated in his sex trafficking scheme, with some theorizing that the Clintons and Donald Trump could be implicated. When Epstein died in prison of an apparent suicide in August of 2019, the many strange circumstances surrounding his death caused many to believe that Epstein was actually murdered in order to keep what he knew from coming out. Maxwell, considered Epstein’s right-hand woman, would have knowledge of the same “black book” list. Thus, according to conspiracy theorists, she would be targeted by the same powerful people who murdered Epstein. Maxwell denies the charges.

Meme Of The Month: August 2020
Wait. What?
The Weekend Wink: Cuties, Distraction Dancing, Far-Left Or Far-Right
Took me too long to make this