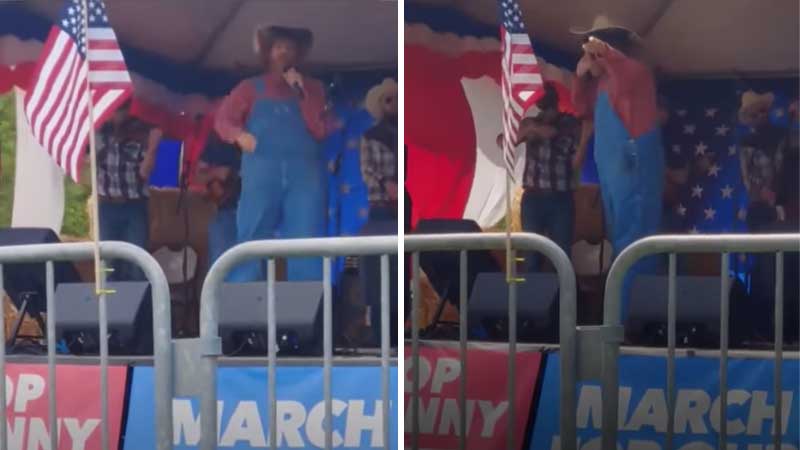 Sacha Baron Cohen is back at it.

Following his 2018 Emmy-nominated series Who Is America?, the chameleon comedian who convinced Vice President Dick Cheney to autograph a waterboarding kit and former Republican State Representative Jason Spence to scream the N-word in a sketch, Sacha Baron Cohen kept a low profile. However, donning a very Mario-esque ensemble, Cohen emerged at the right-wing March For Your Rights rally in Olympia, Washington on Saturday as a racist country singer character.

In a series of videos that have since gone viral, Cohen sings for a crowd of about 500, joking about violently attacking prominent Democrats, like President Barack Obama and Hillary Clinton, and health organizations and officials, such as the World Health Organization and Dr. Anthony Fauci. The song also included anti-Semitic allusions and anti-Asian epithets, referring to Jews as “you-know-whos” and describing the coronavirus as the Wuhan Flu and saying that the U.S. should “nuke ‘em up like we used to do.”

The song continues to advocate for the killing of people who wear masks and journalists. He sings:

The Washington Three Percenters, a right-wing activist group, started the March For Your Rights rally in 2018 as a counter to the March for Our Lives, a gun-safety advocacy demonstration started by the teenage survivors of the Stoneman Douglas High School mass shooting in Parkland, Flordia.

Over the weekend, a video featuring one of the event’s organizers explained the situation, explaining that Cohen’s security would not allow concert-goers to remove the performer from the stage.

Sacha Baron Cohen infiltrated the Washington 3% (local rightwing militia) event in Olympia a few minutes ago. A last-minute big donor paid to sponsor the event, and hire security… And then that security kept the organizers from getting on stage to stop Cohen. 😂 pic.twitter.com/mllLkKBcpZ

Later that day, some speculated, based on a photograph, the Sacha Baron Cohen snuck back into the event as a filmer of that interview.

Yo he came back after they chased him out. He was actually filming this interview 😭 pic.twitter.com/6SgIIaenWH

James Connor Blair, a city council member in Yelm, Washington, complained about Cohen’s infiltration. He writes that Cohen paid for the stage and “musical entertainment.” He also writes that “[Cohen’s] security blocked event organizers from getting him off the stage or pulling power from the generator.”

This post is by a city council member in Yelm, Washington. Earlier this afternoon, Sacha Baron Cohen crashed the event of Washington 3% – a right-wing group of armed insurrectionists and white supremacists – in Olympia.

I look forward to the video… pic.twitter.com/zilUA2zJQU

The video has been making the rounds online, but no one seems to know why Cohen performed the stunt. Thus far, he has stated that Who Is America? will not be returning for a second season, so maybe this was for his own personal gratification.