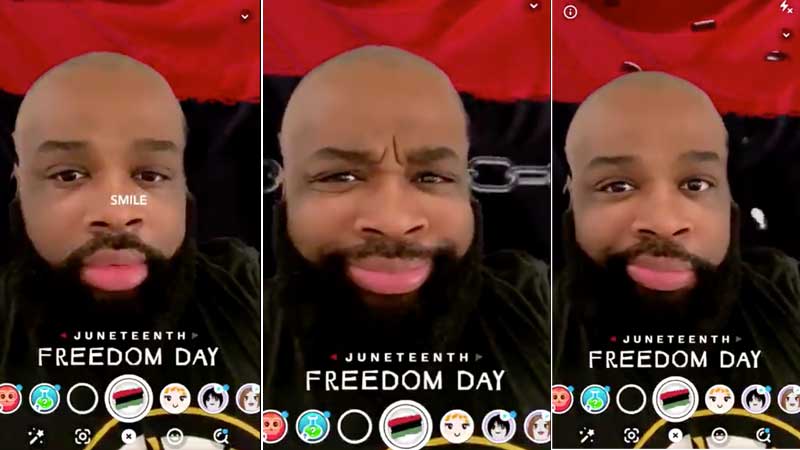 Snapchat apologized for a controversial Juneteenth filter that encourages users to “smile to break chains” over the weekend. The company claims that a diverse group of employees developed the filter.

Amid the 2020 George Floyd protests, social media companies promoted Juneteenth celebrations to showcase their commitment to the Black Lives Matter movement. Snapchat’s Lens featured an animation of chains breaking when the user smiles.

“We deeply apologize to the members of the Snapchat community who found this Lens offensive,” a Snap spokesperson told the Verge in an email. “A diverse group of Snap team members were involved in developing the concept, but a version of the Lens that went live for Snapchatters this morning had not been approved through our review process. We are investigating why this mistake occurred so that we can avoid it in the future.”

On June 19th, people began posting criticisms of the Snapchat filter online, with many criticizing the animation and the message.

Smile to break the chains? Okay then. pic.twitter.com/Wyob3kT3ew

So Snapchat made a Juneteenth filter… I dunno how to feel about it. pic.twitter.com/m671iBV7di

In a leaked email to Snap team members, Oona King, Snap’s vice president of diversity and inclusion, apologized to the company for the filter. She wrote:

Speaking on behalf of my team, clearly we failed to recognize the gravity of the ‘smile’ trigger. That is a failure I fully own. We reviewed the Lens from the standpoint of Black creative content, made by and for Black people, so did not adequately consider how it would look when used by non-Black members of our community. What we also did not fully realize was a) that a ‘smile’ trigger would necessarily include the actual word “smile” on the content; and b) that people would perceive this as work created by White creatives, not Black creatives.

Juneteenth commemorates the emancipation of all Black slaves in the United States. In June 1865, the Union Army brought news of the confederacy’s loss to Galveston, Texas, where the final U.S. slaves were still being held.