Disney Dog Filter Challenge is a photo or video challenge on TikTok and Facebook where participants use the “Cartoon” Snapchat filter on their dog or pet to make them look as if they were a Disney Character. The trend was popularized on TikTok in August 2020.

On August 8th, 2020, Facebook user Danielle Sugden posted the Dogspotting Society Facebook group saying, “For those that don’t know… Snapchat has a new filter and it basically Disneyfies your dog. YOU ARE WELCOME. Plz post your Disney dawgs here.” The post has since been deleted but was screenshot by Facebook user AlltheBess (shown below). The original post gained over 15,400 reacts in a day. 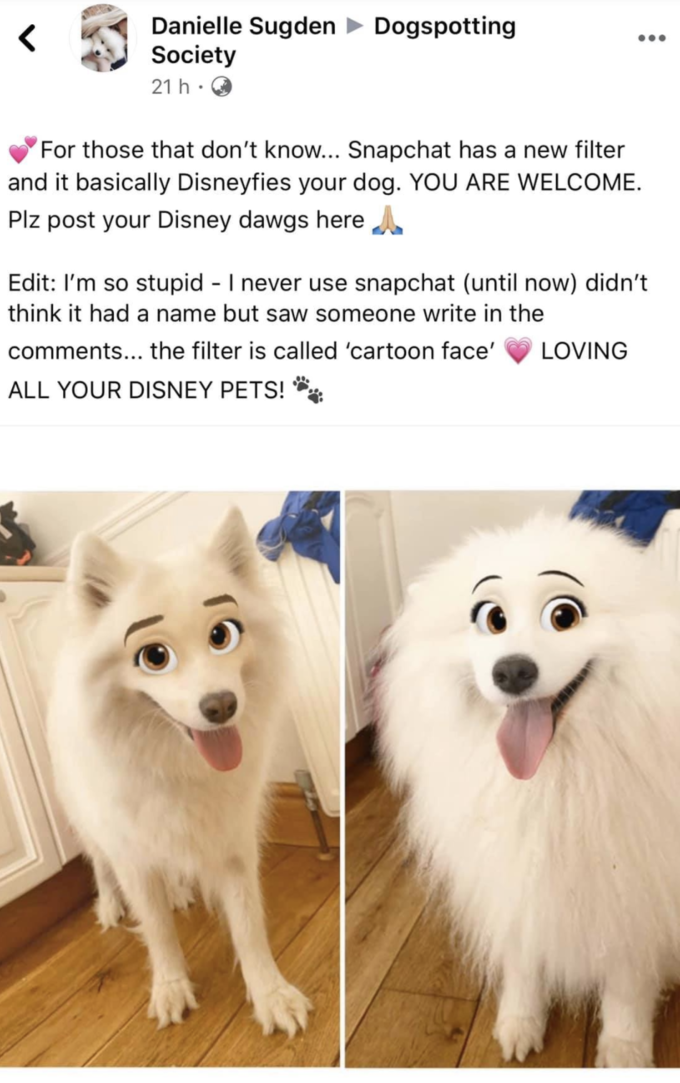 On July 11th, 2020, TikToker ahnestsarah uploaded a popular video of their dog using the filter and the Disney Pictures Intro (shown below, left). The video garnered over 221,500 likes in two days. That same day, TikTokers desijackson4 and ayeshaaaawan uploaded two other popular examples that accumulated over 344,000 likes and 570,200 likes respectively in two days (shown below, right). LadBible and StayHipp published articles on the trend.

Donald Trump Jr. Posts Photoshop Of His Father As Baby Yoda
'Hogwarts Legacy' Reassures Gamers It Has Nothing To Do With J.K. Rowling
My #1 hero
Nintendo Announces Switch Releases Of "Super Mario 64," "Sunshine" And "Galaxy"