Arrest The Cops Who Killed Breonna Taylor is a call to action amongst activists demanding the arrest of the police officers who shot Breonna Taylor while she slept after entering her home on a “no-knock” search warrant. As calls for the arrest spread on Twitter, some users began adding the phrase as a non-sequitur punchline in tweets, a la Epstein Didn’t Kill Himself, leading to backlash online from people who felt the issue was too serious to be used as a meme.

On March 13th, 2020, three Louisville police officers entered the home of Breonna Taylor on a “no-knock” search warrant using a battering ram while she slept. Her boyfriend Kenneth Walker shot at the police, believing they were burglars, and police fired into the home, killing Breonna Taylor. The officers were executing a drug warrant and were given permission from a judge to use the no-knock warrant; however, the suspect in the case had been already been apprehended more than 10 miles away. The officers–Jon Mattingly, Myles Cosgrove, and Brett Hankison–have been placed on administrative leave.

On June 5th, 2020, Twitter users participated in a lengthy Twitter chain started by user @JerichoBrown wherein they would tweet “Arrest the cops who killed Breonna Taylor” while quote-tweeting another Twitter user who tweeted the same thing. 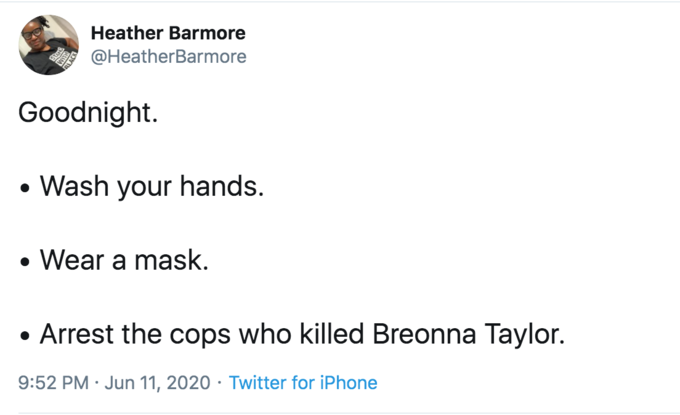 The non-sequitur tweets were criticized by others who argued that turning the call to action into a meme was counter-productive. User @oatmilk40 tweeted, “Tired of y’all making her death into memes and quirky tweets,” gaining over 8,900 retweets and 42,000 likes (shown below, left). User @yahboyantman tweeted, “the meme-ification of Breonna Taylor’s death and how widespread it immediately became is simply fucking horrifying. a person’s lost life isn’t your tweet fodder you absolute weirdos,” gaining over 120 retweets and 350 likes (shown below, right).