A couple of weeks ago, social media was abuzz with news that Bud Light Seltzer was seeking an applicant to fill quite an interesting position. This newly created role was dubbed “Chief Meme Officer” and promotions for the job hunt appeared on every major platform, ranging from tweets on the company’s official account to mainstream media coverage and even sponsored content from meme creators on Instagram.

With the official job posting on Bud Light’s website reading “we know a hard seltzer is only as good as its memes and, unfortunately, our memes are trash,” the intent behind this unusual position was to have a meme creator help lift the brand’s new hard seltzer line beyond the boring, typical advertising of old through a slew of memes that appeal to younger consumers who spend an ever-increasing amount of their time online. 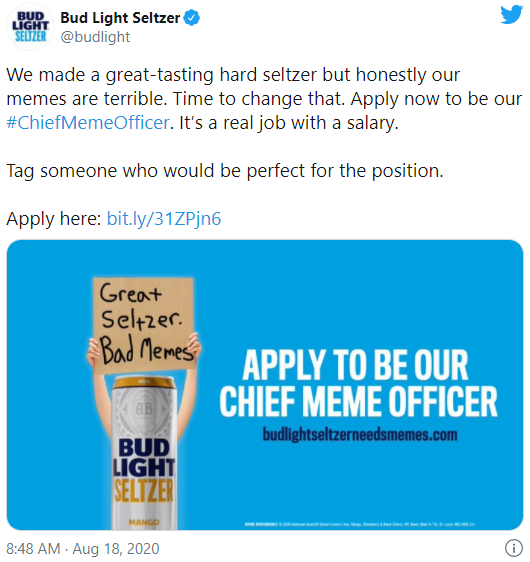 But what, truly (no pun intended), was the goal of all this and what does it mean for the world of corporatized meme creation and those who operate in the space? In order to understand this viral campaign and unprecedented position, we spoke with Bud Light themselves to try and find out what exactly was going on here.

Conor Mason, the senior digital director for Bud Light, said the overall goal of this endeavor harkens back to the rich past of hard seltzer brands and their widespread incorporation of memes, as seen with companies such as White Claw. “Hard seltzer brands are known for having great memes and we needed some fresh, creative thinking to take our memes to the next level,” he said. “So instead of trying to make our own, we are looking to enlist our fans to get in on the action.”

As Mason mentioned, the peculiar phenomenon between hard seltzer and its intersection with meme culture is one that’s well-known. In the mid-2010s, when hard seltzer was first breaking into the mainstream market, brands like White Claw were frequently referenced in memes, eventually becoming entrenched in their identity. Despite their somewhat negative outlooks on hard seltzer and those who consume it, Instagram accounts such as whiteclawgang and YouTubers like Trevor Wallace helped propel these relatively unknown beverages into the limelight through their incorporation in meme culture.

Although many of the early viral memes associated with hard seltzers were created organically, including the catchphrase “Ain’t no laws when you’re drinking Claws,” their ability to stir up interest in these products is undeniable — and brands have taken notice. Likely hoping to recreate this virality, it’s safe to say that Bud Light Seltzer is seeking a similar phenomenon through their online push to find a Chief Meme Officer.

This certainly isn’t the first example of a brand attempting to leverage memes to promote either products, ideas or public opinions, but it is undeniably one of the more prominent with such a huge corporation like Anheuser-Busch backing it.

“This is a first-of-its-kind program and position for Bud Light,” Mason said. “A hard seltzer is only as good as its memes the brand puts out in the world, so, for Bud Light Seltzer, we were in search of some new thinking, recruiting the best memers out there to join our marketing team – as the first-ever Chief Meme Officer – for the next three months to help create epic Bud Light Seltzer memes.” 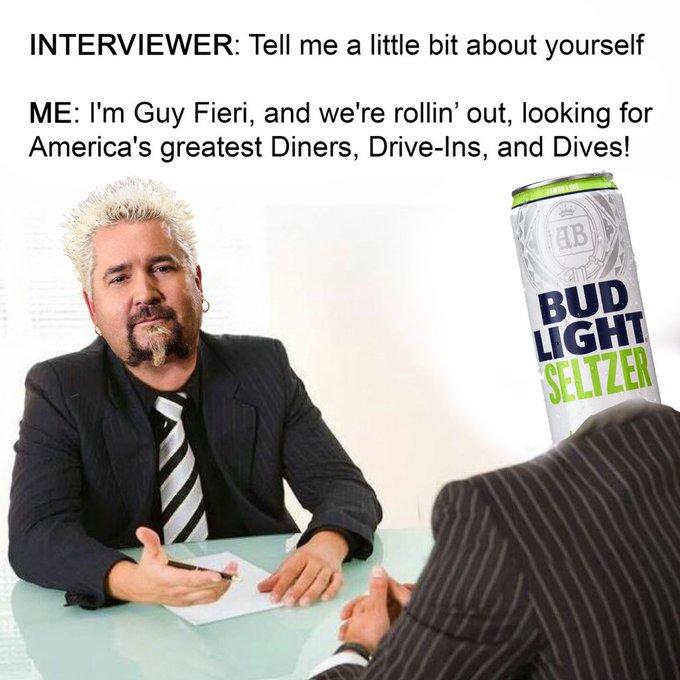 To get some additional insight from an industry insider, we also spoke with Dave Infante, a beer industry journalist who edits Fingers (an independent newsletter about drinking culture and being online), about the role. When asked if he had ever seen any precursors to Bud Light’s campaign, Infante said, “I haven’t seen anything from a beer company quite so oriented towards Gen Z and the meme-creator community before, with the POSSIBLE exception of the recent French’s x Oskar Blues ‘collaborative’ mustard beer, which was almost perfectly calibrated for online-sharing. No idea if the beer was any good, but the beer was never the point: the #ThisIsSoUs social buzz was the whole ballgame.”

So what does this position entail? According to the application, the job’s responsibilities include making at least 10 memes per week, and the perks include payment in seltzer, $5,000 per month for three months and the ability to “go into your next job interview with Chief Meme Officer on your resume.”

At first glance, $15,000 for three months of work and a total of 130 memes sounds like a pretty decent gig for many, but coming from the world’s largest beer company, with a market cap around $100 billion, it begs the question, “Is the true value of this in the memes and their creator, or the viral marketing campaign of hiring a ‘Chief Meme Officer’ and the headlines that came along with it?”

While their intentions may not be malicious or downplaying the value of creative work, it’s hard to argue that the launch of Bud Light’s initial search for the role wasn’t a successful attempt at grabbing headlines and creating a buzz on social media. To build off this potential intent, the mere fact that this position is temporary alludes to the suggestion of the “Chief Meme Officer” perhaps being nothing more than a viral marketing push.

On the topic, Infante added, “It’s a smart evolution of the type of earned-media campaigns that Anheuser-Busch InBev has pulled off in the past, but I have serious concerns about how it devalues creative labor at a time when millions of Americans are out of work.” 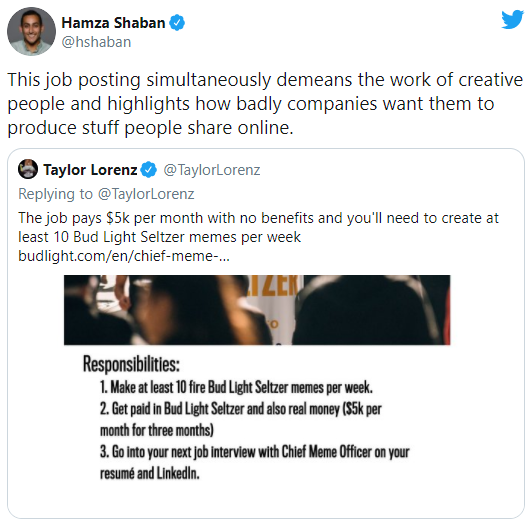 We posed the question to Bud Light as well, inquiring about the reason for the position’s relatively short life cycle. “We think the position is going to add a lot to our team, so we are open to extending it further in the future,” Mason said. “For now, though, the position is just for three months.”

Perhaps the biggest unknown, which may also play a role in all this debate, is whether or not the memes created by whoever gets the position will actually resonate with their intended audience or fall victim to the common, negative reaction from many online users who even catch just a whiff of corporate-backed memes. For many previous attempts by companies who’ve tried to connect through memes, one of the most routine responses from the web is a near-instantaneous “How Do You Do Fellow Kids.”

Sometimes a brand manages to warrant this dismissive reaction while simultaneously turning it into a successful form of self-depreciation, but usually, it ends up falling flat with their target audience and leads to hordes of online commentators labeling them as “cringe.” As such a massive company that’s certainly no stranger to the world of humor (with its long-standing history of comedic advertising), they may be able to pull it off for a certain segment of the internet, but it’s just as plausible Bud Light Seltzer has already gotten the attention it needed from the widespread coverage of the position itself.

Infante’s outlook on the overall goal of this push from Bud Light is that it obviously wants to resonate with the same consumers who flocked to White Claw due to the memes surrounding the brand but also alludes to a more troubling phenomenon in the advertising and marketing industry as a whole. “I imagine there’s interest both internally at AB InBev and across the ad/marketing space more broadly whether a brand can successfully outsource content creation to cheap, vulnerable young laborers while positioning it as a novel/exciting/genuinely career-advancing opportunity to those workers.” 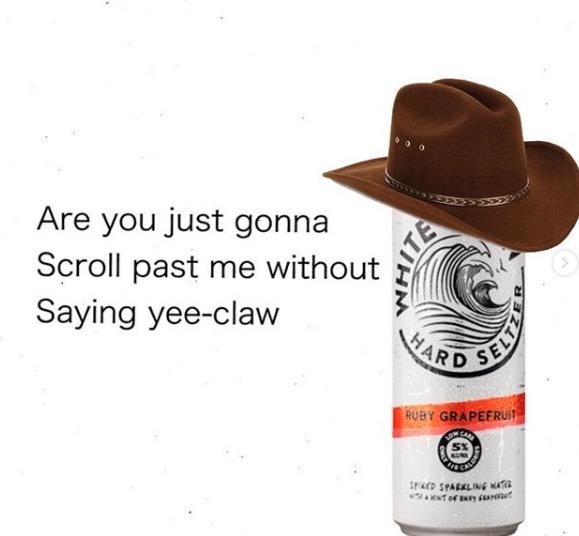 Despite this, the exact measurement of success for the position through its ability to both connect with potential buyers and create awareness of the new product remains to be seen, so only time will tell if Bud Light manages to recreate the organically generated pervasiveness of White Claw in meme culture.

“Will it fall flat? God, I don’t know,” Infante said. “I’d like to think so, but having researched and reported on the beer space for about a decade, I can tell you that it’s a rare advertising campaign in this space that doesn’t find an audience among some cohort of drinkers. Whether young drinkers are truly bullshit-averse enough to make this a net-negative for ABI … personally I kind of doubt it. But what do I know?”