Political memes have been on the rise for several years now, steadily growing in prevalence between the 2016 and 2020 U.S. presidential elections, on just about every social media platform or website. Despite their meteoric rise, does anyone actually enjoy these types of memes, and how do most generally feel about them? 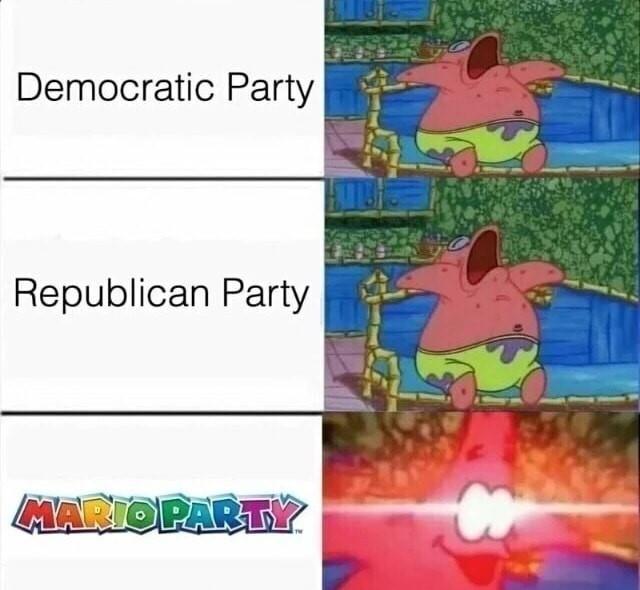 In order to get a better understanding of political memes, their reception and general effectiveness on target audiences, we conducted a series of polls through CivicScience over the last two weeks with thousands of respondents. Posing questions to a wide range of Americans, from Democrats to Republicans and everyone in-between, we learned that while most online users consume memes, most of them aren’t too ecstatic when they’re used for political gain.

First up, let’s take a look at how people feel after viewing a particular type of meme. Since memes come in nearly infinite forms and numerous topics, we broke them down into four overall categories: Entertainment, Pop Culture, Parenting and Political. 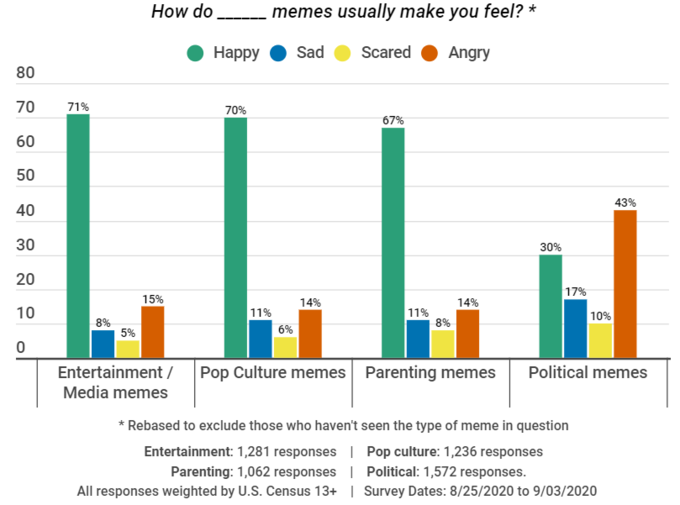 With over a thousand respondents each, the poll clearly shows that while most types of memes are universally well-liked, most people react negatively to politically charged variants. Citing anger as the dominant emotion to seeing such memes, with sadness or fear also seeing upticks, it appears that politics and memes don’t evoke feelings of happiness anywhere near their more lighthearted counterparts.

Breaking this information down further by political affiliation, we can also see that the majority of all political parties and their followers generally react the same way to stumbling across such memes on the internet. 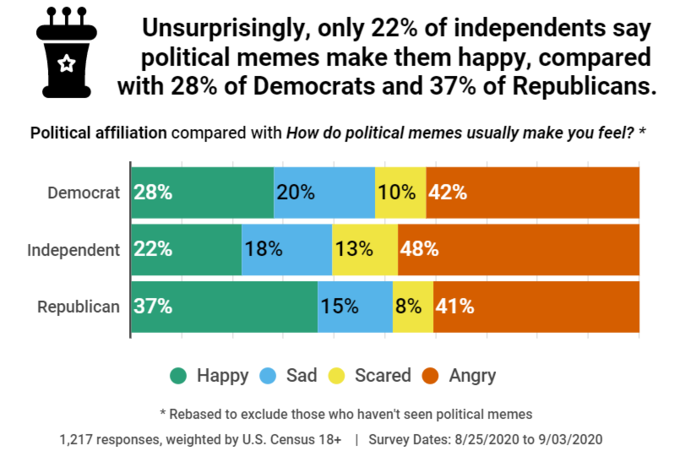 Between Democrats, Republicans and independents, the latter group seems to get the least enjoyment from political memes at only 22 percent happiness and a whopping 48 percent anger. Interestingly, Republican respondents noted a marginal increase in happiness to seeing these memes compared to Democrats. This perhaps explains the success behind viral catchphrases like “The Left Can’t Meme,” a popular slogan used by conservatives to mock explicitly left-wing humor as forced or out of touch.

which perhaps explains the success behind viral catchphrases like 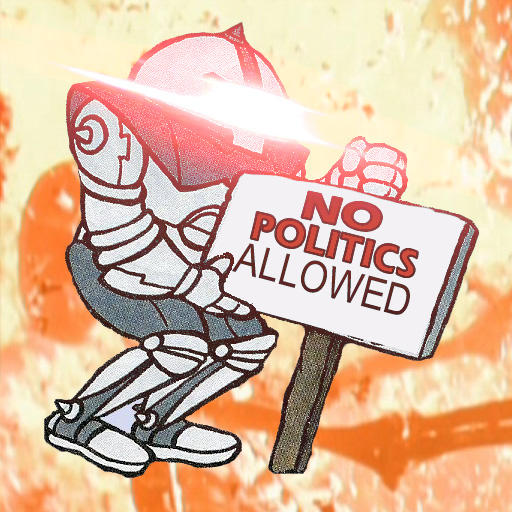 Based on all these polling results, it seems clear that, at least in our study, people don’t really like political memes for the most part. As we’ve seen this year with Meme 2020 and Bloomberg’s sponsored Instagram memes, both of which attempt to garner support through influence, the intersection of politics and meme culture is continuing to increase. Memes being used as advertisements is another trend on the rise, but this strategy is notoriously mired by failure or ridicule.

Now whether or not these meme-oriented campaigns are successful or effective isn’t entirely clear-cut, but based on another poll, it appears most users are unreceptive about brands using memes as a tool for advertising. 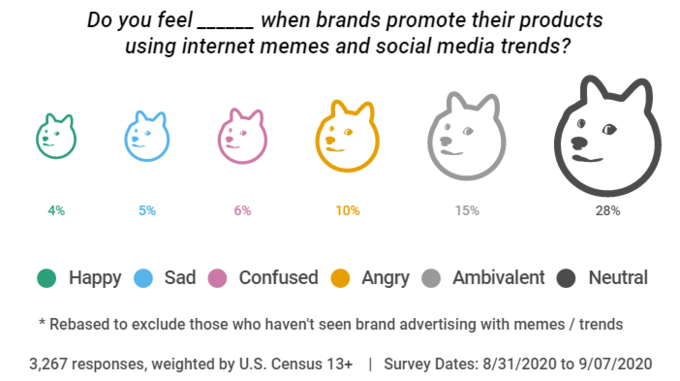 With the majority of respondents expressing feelings of dismissiveness, disinterest or outright confusion, the trend doesn’t seem so effective, with the third-highest result evoking anger. This isn’t entirely surprising either, as die-hard meme lovers so often loathe this type of internet culture “appropriation,” but don’t count on that notion warranting any decrease in memes being used for influence (whether commercial or political).

On Know Your Meme’s own database, there’s been a sharp rise in the number of images containing the tag “politics” since early 2019 (as seen in the graph below), further supporting this concept that the encroachment of politics into meme culture is steadily increasing. 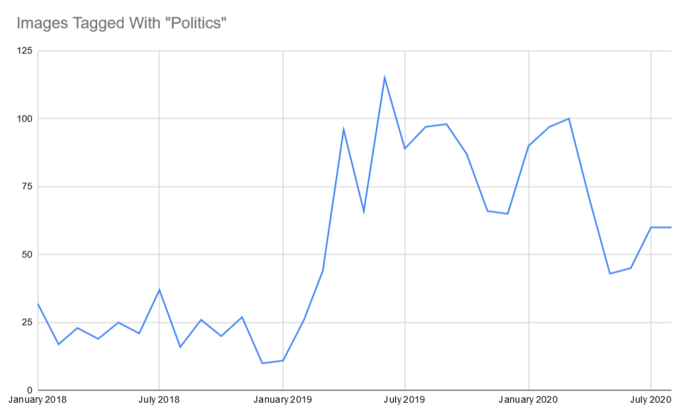 One plausible explanation for all this political meme backlash, aside from simple dismissiveness, is the growing concept of the divide between political ideologies in the U.S. According to a Pew Research Center survey from early March, almost nine-in-ten Americans see “strong” or “very strong” partisan conflicts today than in the last two presidential election years.

This divisiveness between political affiliates may be a significant factor in why so many Americans react with anger towards seeing political memes, and the reason for this can be seen in a Pew study from 2017 that shows the partisan divide on political values growing even wider. This split has become so significant that while more people in the 1950s cared about what religion their child’s spouse was, now, their spouse’s political party has become even more important. 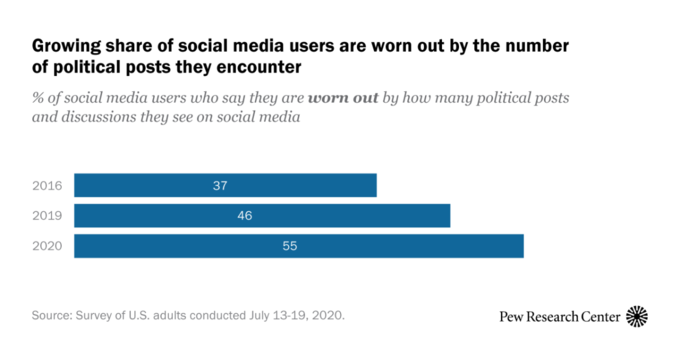 The general apathy towards politics, including such memes, online may post another notable explanation. A Pew Research Center survey of U.S. adults from mid-August shows that 55 percent of social media users stated they were “worn out” by political posts or discussions they see online (up 18 percent from 2016). So as all things politics continue invading feeds everywhere leading up to the 2020 election, political memes might be just another source of strain on Americans who are seeking an escape on the internet. 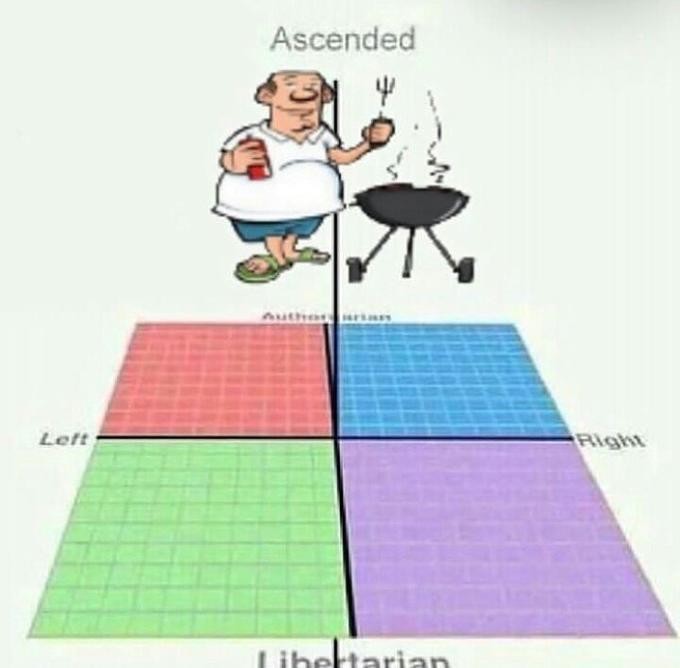 Above all else, this apathetic attitude from Americans and their loathing for political discussion have also given rise to another noteworthy meme: I Just Wanna Grill for God’s Sake. Depicting a seemingly mundane man standing next to a backyard BBQ grill, this simple image macro has become an iconic symbol for abandoning an obsession with politics to enjoy life’s simple pleasures (also known as “taking the grill pill”). Due to its growing presence online, this phenomenon may also hint to the increasing exhaustion with political memes we see in this data.

Either way, it seems clear that politics and memes might mix, but that doesn’t mean anyone wants to consume them, let alone enjoy them.

I hope u are getting this:D
Still on the verge of collapse, but that's alright
uh
Hagrid Actor Robbie Coltrane Defends JK Rowling Amid Transphobia Allegations