The debate surrounding free speech online has always been a complex issue, but one site, in particular, has been perhaps the most prominent subject of this heated discussion. Although frequently touted as one of the foremost havens of free speech on the web over the years, Reddit has consistently contradicted this public perception since it was founded, even more so as of late.

Earlier this week, Reddit updated its content policy in a move to combat hate speech, while simultaneously banning around 2,000 subreddits it claimed promoted this type of discussion. Now known as “The Great Ban,” infamous subreddits such as /r/The_Donald were kicked off the platform alongside more confusing decisions like /r/BigChungus. While lots of these bans were mostly unsurprising, some of the subreddits’ moderators have come out and said that they received no notice of potentially bannable offenses from admins before the banhammer came crashing down. The policy change also came off a bit worrisome (or plain confusing) to others online, particularly Rule 1’s “Hate Based on Identity or Vulnerability,” which stated, “While the rule on hate protects such groups, it does not protect all groups or all forms of identity. For example, the rule does not protect groups of people who are in the majority or who promote such attacks of hate.” 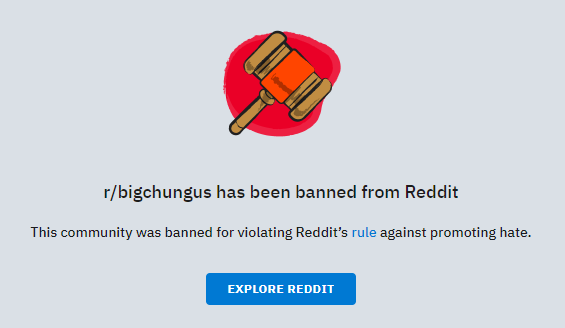 While many online since Monday’s announcement have proclaimed that this latest move marked an unprecedented shift in Reddit’s stance on being pro-free speech, it begs the question, “Was Reddit ever really dedicated to freedom of speech?”

Traveling back to the early years of Reddit, which began in 2005, there’s little emphasis from co-founders Steve Huffman and Alexis Ohanian about the site being founded as a bastion of free speech, despite misconceptions. Ohanian himself only used that exact term in February 2012 during an interview with Forbes. When asked what the Founding Fathers would think of Reddit, he responded, “A bastion of free speech on the World Wide Web? I bet they would like it.”

Erik Martin, who joined the company in 2008 and later became GM, was one of the first staffers to ever publicly use the phrase. During an AMA in July 2011 when a Redditor asked him for his thoughts on subreddits such as /r/jailbait and /r/picsofdeadkids, Martin said, “We’re a free speech site with very few exceptions and having to stomach occasional troll reddit like picsofdeadkids or morally questionable reddits like jailbait are part of the price of free speech on a site like this.”

In October 2012 during Reddit CEO Yishan Wong’s reign, the site would have one of its first major struggles with free speech after Gawker exposed the personal information of infamous Redditor Violentacrez, who was responsible for many controversial communities (like the previously mentioned /r/jailbait). Upon Gawker’s article exposing him, more than 70 subreddits proceeded to ban all links from the site, while Wong simultaneously told staff that admins “even briefly considered the consequences of a site-level ban on the entire gawker network,” but adding that “we stand for freedom of speech … and we will respect journalism as a form of speech.”

In 2015, a controversial policy change caused an unprecedented backlash on the platform. After the site instituted its first true anti-harassment policy, which prohibited attacks and harassment of individuals through Reddit, Ohanian responded to the new rules in a thread with “Reddit should be a place where anyone can pull up their soapbox and speak their mind, or have a discussion and maybe learn something new and even challenging or uncomfortable, but right now Redditors are telling us they sometimes encounter users who use the system to harass them and that’s a problem.” In response, many expressed they found the statement troubling, with one Redditor begging the question, “Where is the line going to be drawn before you take away someone’s soapbox? When does the point come where group A gets the right to say something but group B doesn’t, because one is politically correct and one is not?”

A month later, five subreddits were then banned for violating the new harassment policy. Ellen Pao, Reddit’s CEO at the time, expressed her reasoning for the decision during an interview with NPR. “It’s not our site’s goal to be a completely free speech platform. We want to be a safe platform and we want to be a platform that also protects privacy at the same time.” Pao would resign a month later after changes to Reddit caused widespread backlash from many on the site.

During an AMA with Huffman in July 2015 regarding the backlash and policy update, perhaps the most telling stance on whether or not Reddit was rooted in free speech came to light. “Neither Alexis nor I created reddit to be a bastion of free speech, but rather as a place where open and honest discussion can happen,” he said. In 2016, Huffman found himself once again in hot water after he admitted to anonymously editing user comments that criticized him after being called out by other Redditors. 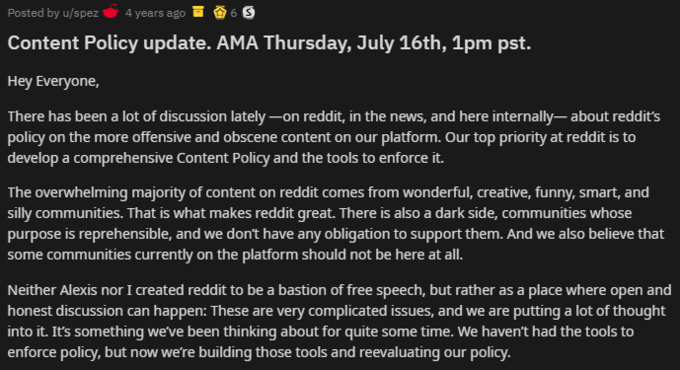 In 2018 and 2019, with the passing of the SESTA/FOSTA bill, increase in advertisements on both mobile and desktop and the introduction of quarantining subreddits on the site, censorship continued to rise, culminating in 2020 when users began receiving suspensions for upvoting content Reddit said went against its policies in February, as well as the most recent event, “The Great Ban.”

Amid the current outcries of how the site has censored people, betrayed founder intentions or any other complaints from the last decade about Reddit abandoning its roots in free speech, you have to ask yourself if Reddit really ever was a bastion of free speech or if users merely hoped it was. Maybe it was to please advertisers, maybe it was from changing social pressures, or maybe, Reddit was never a haven of free speech to begin with.

It’s insane Reddit banned its Gender Critical subreddit. This widespread attempt to stifle discussion about the nature of sex and gender and gender identity is not going to work. You don’t have to agree with GC positions to understand this. pic.twitter.com/dF6XNP65Vk