Unsubscribe is a 2020 horror film created using Zoom with a zero dollar budget by YouTubers Christian Nilsson and Eric Tabach that reached the number one box office spot in the United States for one day in June. The film was created as an experiment to see if they could top the box office by renting out a theater and buying all the seats themself during the coronavirus pandemic.

On June 9th, 2020, YouTuber Eric Tabach posted to Facebook saying, “If you or anyone you know in the philly/ny area wants to help out with a shoot tomorrow hit me up!! It’s gonna be big!” which reached very few people (shown below).

The next day, BoxOfficeMojo showed an independent movie Titled Unsubscribe reaching the number one spot that day making $25,488 (shown below).

On June 14th, the trailer and full movie became available to rent on Vimeo (shown below, left). That same day, Eric Tabach uploaded a YouTube video titled “I Made The #1 Box Office Movie In America” (shown below, right). The video received over 56,600 views and 7,100 likes in five days.
On June 15th, Christian Nilsson posted pictures of the screening event and an explanation of the plan to Facebook (shown below). The post gained over 250 reacts in four days.

Want to hear something ABSURD?
Last week, I had the #1 MOVIE IN AMERICA…
BACKSTORY
Last month, YouTuber Eric Tabach and I were chatting about how movie theaters across the country were closed due to the pandemic. We joked any film put in a theatre would instantly top the box office. Realizing the unique situation presented a loophole, we hatched a plan…
THE PLAN
If we rented out a theatre (what the film distribution world calls “four-walling”), we could keep every dollar made from ticket sales. If we bought every seat, the money would funnel right back into our own pocket.
The next day, I wrote a short horror film titled “Unsubscribe”. A week later, it was completely shot over Zoom. Last week, Eric and I bought out a theater in Westhampton Beach, NY and screened to an empty audience. The next day, it was the number one box office movie in America, as reported by The Numbers.
THE MOVIE
Five YouTubers join an online video-call and find themselves haunted and hunted by a mysterious internet troll.
Starring Charlie Tahan (“Ozark”, “I Am Legend) and several notable YouTubers including Eric Tabach, Michelle Khare (HBO Max’s “Karma”), Zach Kornfeld (“The Try Guys”), Thomas Brag (“Yes Theory”), and others.
“Unsubscribe” was released yesterday on Vimeo On-Demand. CHECK IT OUT! 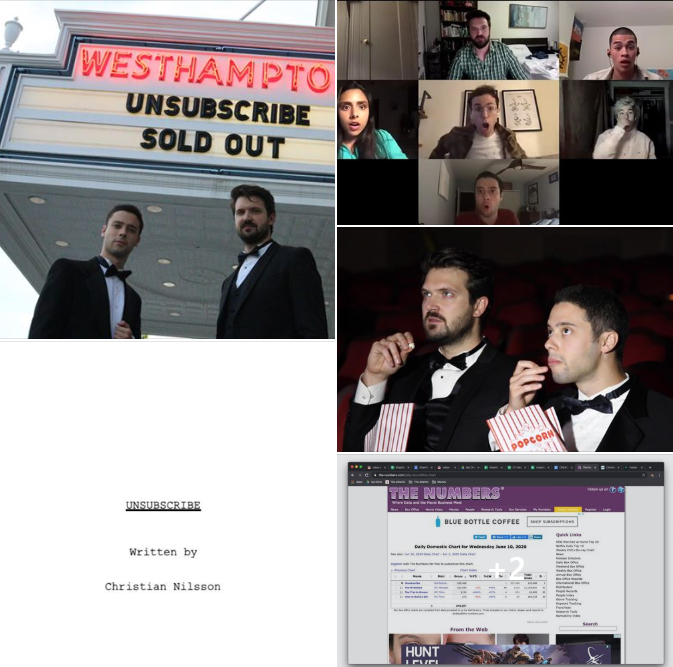 The film and its backstory were reported on by Decider, Irish Times and BBC. On June 17th, Twitter user @ErikDavis tweeted a link to the story and said, “Here’s an amusing box office story: These filmmakers shot a short horror film over Zoom, then took advantage of a loophole and rented a theater, bought out every seat & screened it for no audience so they could say they had the #1 movie in America” (shown below, left). The tweet received over 4,200 likes and 1,500 retweets in two days. The next day, Twitter user @jd_burge tweeted a link to his review giving the movie two and a half stars and said, “I watched the #1 movie in America on my lunch break. It’s not very good, but truly–that’s beside the point” (shown below, right). 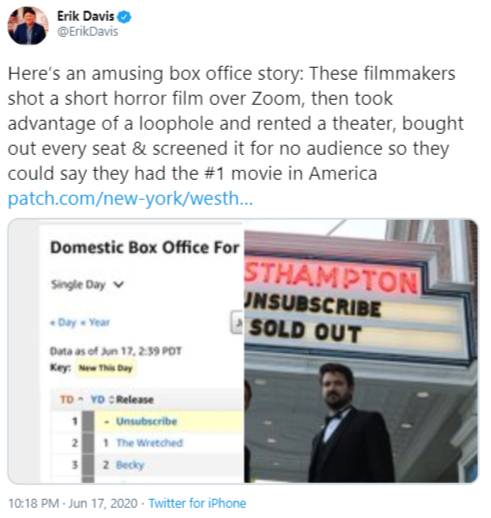 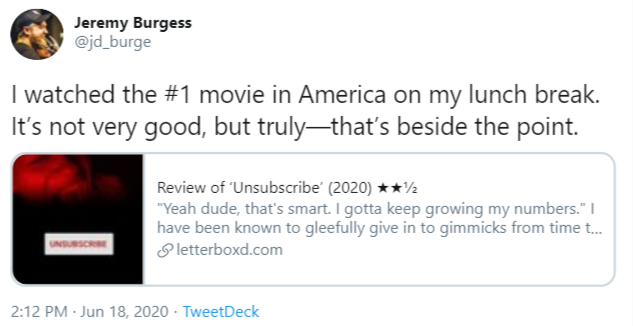 Dio Brando Has "Seen Enough" In New JoJo Meme
War Never Changes
Subaru Modified To Play Toto's "Africa"
Due To The Coronavirus, There Will Be No New Emoji In 2021