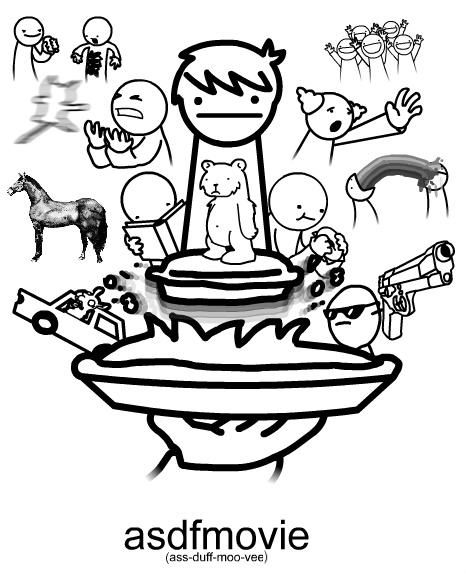 Prior to being uploaded to YouTube, asdf began as a webcomic series by TomSka. He initially posted the strips on Sheezyart under the name “asdfman.” Several of these strips went on to be featured on Tomska’s own site, asdfland, following the movies’ rise to popularity on YouTube. Most of the clips used in the flash animations are taken from comic strips.

Tom drew inspiration from The Lazer Collection other animated flash videos at the time, which he then decided to make his own animated series in a similar style.
The first asdfmovie was uploaded to YouTube on August 10, 2008. As of October 2011, it has over 19 million views. The second video was uploaded on January 1st, 2010, and the third on December 30th, 2010. Each episode has been viewed over 18 million times. The fourth episode was uploaded on September 2nd, 2011, gaining over 7 million views within the first month of upload. The video was also highlighted as the Daily Feature on Newgrounds upon its release. The fifth installment was released on May 11, 2012 and received over 1 million views in just over one day. Similarly, the sixth installment released on February 9th, 2012, received over 3 million views in just 3 days.

The creator of asdf is London illustrator Thomas Ridgewell, who was born June 27th, 1990. His Twitter account has approximately 8000 followers. He maintains a personal website where all of his social network accounts can be found. In addition to asdf, Ridgewell has uploaded several other films to his YouTube channel, many of which are live-action. His channel was created on May 30th, 2006, and has a total upload view count over 114 million for approximately 58,146 views a day.

Derivatives of the asdf movies can appear as remixed scenes with different characters from the videos, reframed to reference other memes or internet trends. These remixes are often comics, but occasionally appear as GIF animations as well.

Several clips have spun off into memes of their own, with I’m Gonna do an Internet, from the fourth movie and I Like Trains, from the second movie being the most notable.

Many of the individual clips have been re-uploaded as stand-alone videos that are often used in similar vein of reaction images or reaction videos. The surreal and unpredictable nature of some of the videos allows people to use the images for expressing shock or confusion. Examples of such usage can be found on the Tumblr tag for “asdf movie.”

Various characters and scenes from the videos have also spread beyond YouTube. The series currently has both a Facebook fan page with over 18,000 likes and a TV Tropes page. The character Desmond the Moonbear from asdfmovie 2 has also been given his own Twitter account though it is not active. Sharkrobot and Hot Topic have also sold merchandise based on the videos.

On July 17, 2010, TomSka uploaded a video entitled “asdfcomp.” In the video he announced a contest for whoever could make the best asdf-esque skit. The winner, in addition to receiving an unnamed prize, would have their submission remade and used in asdfmovie 3.

Over 800 videos were submitted to the contest. Although not all were of the same level of quality or actual legitimate submissions, many videos received praise. The winner was “asdfcomp – New Dog……….?” by Youtuber MarcSpastic1. As promised, his video was remade and used in asdfmovie3.
Skits from the asdfmovies have also been remade by the fans. Some people choose to redraw the skits or combine scenes from various tv-shows using the original audio from the asdfmovies. Others have gone as far as remaking the skits using software like Garry’s Mod or animation programs like Miku Miku Dance.
In addition, there is also a sizable quantity of German asdfmovie dubs. This lead TomSka to post an additional asdfmovie4 dubbed in German.

Search interest began in September 2008, a month after the original video was uploaded to YouTube. Interest suddenly rose in January 2010, and again in January 2011 and September 2011. These peaks correspond to the release of the new episodes.

Poor lad
A Collection Of Memes About "Doomer Girl," The "Derpina" Of The Modern Age
Shuck
"Sk8ter Boi" Lyrics Are The Meme Gifts That Just Keep On Giving