Filthy Frank is the online handle of video blogger and Internet comedian George “Joji” Miller, who is best known for his absurdist and sarcastic style of humor and impersonation of various cultural stereotypes.

The DizastaMusic YouTube channel was created on June 15th, 2008. The first video was uploaded to the channel several days later on June 19th, 2008, featuring a masked man wearing a rasta costume dancing to the song “Get Low” by rapper Lil Jon (shown below).

On February 29th, 2012, a video titled “Mr. Pink and Friends” was uploaded to the DizastaMusic YouTube channel featuring Frank and another man in lycra body suits acting deranged and staging pranks in public places (shown below, left). Within one year, the video received over 229,000 views and 590 comments. On May 12th, Filthy Frank published a video in which he dances to the song “First of the Year (Equinox)” by Skrillex while wearing the pink lycra body suit (shown below, right). Over the course of the next nine months, the video garnered upwards of 1.2 million views and 4,000 comments.

On February 2nd, 2013, Filthy Frank uploaded a video in which he and several friends wearing different colored body suits perform variations of the “Harlem shake” dance (shown below). Over the next week, the video accumulated over 350,000 views and inspired many other YouTubers to create additional “Harlem shake” videos.

Welcome to the Rice Fields, Motherfucker

Filthy Frank is know for using racial and ethnic humor in his skits, which may be perceived offensive by some viewers. On May 31st, 2012, Frank uploaded a video in which he performs his own interpretations of 100 accents from around the world based on racial and ethnic stereotypes (shown below, left), followed by a second part uploaded on June 12th (shown below, right).

On August 25th, Frank uploaded a(now deleted) similar video titled “How to Say Hello in 30 Languages,” performing additional impersonations of people in various countries from around the world (reupload shown below). All three videos rank in Filthy Frank’s top five most viewed as of February 2013.

As he was almost always in character on camera, Filthy Frank’s identity was for a long time unknown. In December of 2012, YouTuber BlamedForRape commented to a DizastaMusic video claiming that Frank’s real name was George Miller and that they had attended high school together (shown below).

In May 2014 he uploaded a video, titled “Filthy Frank Exposes Himself”. In the video he appears as himself, George (“Joji”) and reveals to the audience that he is epileptic. The video had a largely serious tone, despite the fact that he appeared along side several characters he (George) played. Along with the video he uploaded v-logs to the youtube channel jojivlogs. However, these have now been removed. He later stated in a livestream that he stopped making vlogs because he didn’t have the time and they didn’t fit the tone of his main channel. 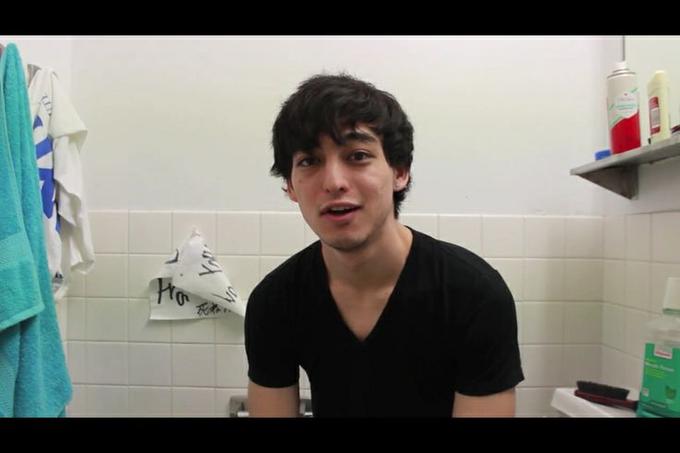 On December 29th, 2017 Miller made the announcement on the official Filthy Frank Twitter account that he was done with comedic videos, owing to his lack of enjoyment in making them and the damage that the various voices posed to his health (shown below). He also pointed to neurological conditions he did not discuss. 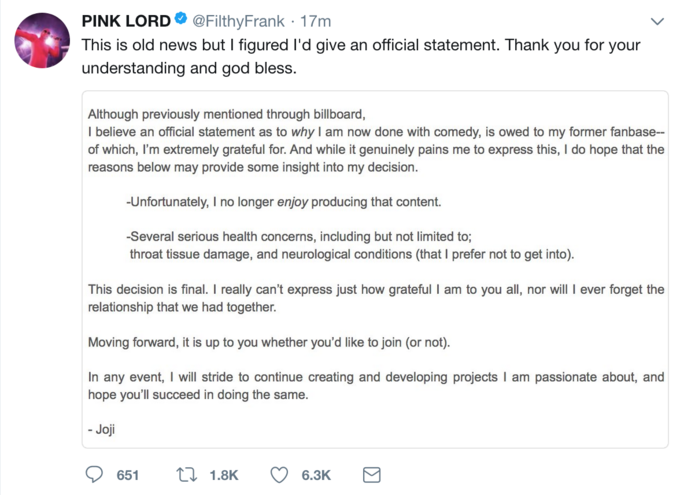 In the statement, Miller refers to an interview he gave with Billboard in which he discussed moving on from the crude humor of his Filthy Frank videos to focusing on his music career as Joji, a lo-fi “trap-n-B” artist, as Billboard describes him (his video for his song “Will He” gained over 14 million YouTube views since its release in October of 2017).
Several of the top posts on /r/FilthyFrank over the following several days expressed mourning for the end of the character. For example, a Press F To Pay Respects joke posted by user PranzoFranzo gained over 1,900 upvotes. Another post by Thuktunthp_Reader gained over 1,100 upvotes.