Hugh Mungus is a gag name based off the word “humongous,” which was uttered by Seattle resident Rudy Pantoja while being filmed by Black Lives Matter activist Zarna Joshi, who subsequently accused him of sexual harassment.

On August 11th, 2016, Joshi published a lengthy blog post on her Facebook page, claiming that she was “sexually harassed” while protesting the building of a police station at the Seattle city hall. At the bottom of the post, Joshi included video footage of Pantoja identifying himself as “Hugh Mungus,” which she interprets as a reference to his penis (shown below).

Every day it gets worse. I went to City Hall to #BlocktheBunker this morning and after public comment, I was standing in the lobby with the crowd, recording media interviews and stuff. Some TV crew were recording an interview with a pro-Bunker guy, who said his name was Rudy, who had talked about how the cops had helped his heroin addicted daughter and that “Girls Matter”.

That same guy then sexually harassed me. And when I asked him why he was sexually harassing me, he kept doing it. When I raised my voice and told everyone what he was doing, he ran away.
The security guards, who witnessed everything, then accosted me to tell me to be quiet. When I asked them why they were going after me instead of the man who sexually harassed me, they called the cops ON ME.
The cops were already there, of course. They didn’t go after the man who’d sexually harassed me. When I asked them to at least take notes of what happened and why they were not going after the man who sexually harassed me, they said that I should speak with one of their officers alone. They didn’t take any notes, they didn’t even send one man to go look out for the guy while this conversation was going on for over ten minutes. The officers stood there with their hands on their guns until a white man asked why they had their hands on their guns. Why were they holding their guns while talking to a woman of color who was sexually harassed? Why would they ask that woman of color to go alone with them to talk to them, while holding those guns?
I refused to leave the safety of my community to speak to a cop alone and it was only when another person – an older white male – spoke up, that the cop decided to take down my description of my harasser and I showed them some of this video.
I was sexually harassed and then criminalized because I wouldn’t shut up about being sexually harassed. And the city wants to give these cops $160 million dollars to build a military bunker to “protect us”. The cops didn’t protect me. They didn’t look out for me. They didn’t give a damn. Why would they? They’re part of a gang that molests and criminalizes innocent people all the time.
And by the way, the guy who sexually harassed me made a public comment that was pro-bunker and PRO-COP. The cops are definitely not going to go after him.
After this all happened, I went to the city council offices with community members to make a formal complaint about how the security guards treated me. Here’s the thing: The security guards are not public employees. They’re employed by a private company. Lorena Gonzalez’s aide Brianna came out, listened to what I said, and then told me that I must have orchestrated this…as if I organized my own sexual harassment and criminalization.
I asked her to find out the accountability process for security guards, since they’re not city employees. She told me that she’d done a lot to try to help me and she said that she didn’t have time today to do more. We were all so stunned by this that there was silence in the room after she said this. All she’d done was sit down and not answer my questions. She wrote down a number and pushed it to me across the table, foisting me off on another department. I asked to speak with Council Member Lorena González regarding this, Brianna said she could “probably” do that. When I asked when this meeting would be, she said: “Oh, now this has gone from a phone call to a meeting?” as if I was too demanding. She said that I would hear back by 5pm but only after I asked, repeatedly, when I would hear from them. At present, it’s 9pm, and I’ve heard nothing from any of them.
Kshama Sawant’s aide Ted came in to the room to help, as did Jesse, Mike O’Brien’s aide. They were more compassionate and forthcoming with information then anything Brianna said but it seems like there is no accountability process. Private security guards in our tax-payer funded city hall don’t answer to anyone.
Why did no one stop the man who sexually harassed me?
Why are the security guards in city hall private employees and not accountable to the public?
Why was I told to be quiet when I was sexually harassed?
Why was I subjected to intimidation and physical threat from the cops?
Why was Lorena González’s aide Brianna so callous and dismissive?
Why are the cops getting $160 million dollars to build a militarized fortress when they can’t even catch one sexual harasser when he’s right in front of them?
What would have happened to me if the community hadn’t been there to witness?
Call here to complain about Lorena González’s aide: 206 684 8802.
Call here to complain to the private security company: 206 233 7812
Call here to complain to the City about the private security company: 206 684 CITY
Call here to complain about the racist and threatening cops: 206 625 5011*
*Sidenote: I think it likely that the cops or someone will come after me, so if anything happens to me, please don’t think it was an accident.
#Patriarchy #Racism #Capitalism #BlockTheBunker

On August 18th, YouTuber YT Vault reposted the video, identifying the man as “misogynist Sam Hyde.“ That day, the American law enforcement organization Blue Lives Matter published an article about the video.
On August 20th, 2016, the video was reposted by YouTuber RageWasHere. On August 22nd, the conservative news site Heat Street published an article about the incident. On August 23rd, an entry for Zarna Joshi was created on Encyclopedia Dramatica. On August 25th, YouTuber Chris Ray Gun uploaded a reaction to the video titled ”Feminist vs Dad Jokes” (shown below).

On August 31st, YouTuber h3h3productions posted an episode reacting to the video titled “Crazy Feminist Gets Triggered Ft. Hugh Mungus” (shown below). Within 48 hours, the post gained over 1.2 million views and 26,100 comments. The following day, Redditor mattgtv submitted the video to the /r/h3h3productions subreddit, where it gathered upwards of 5,300 votes (84% upvoted) and 1,400 comments. In the comments section of the post, Redditor MooseMan24 claimed to have known the man featured in the video, noting that he had just spoken at City Hall about his “daughter’s struggle with heroin.”

In late October 2016, Joshi released a series of videos titled “Zarna Responds,” in which she dicusses various topics related to feminism and the patriarchy (shown below). Additionally, Joshi set up a page on the donation site YouCaring for viewers to donate to her personally.

On November 5th, 2016, h3h3productions posted a video titled “The Hugh Mungus Lady Responds,” in which Klein accuses Joshi for using the argument of “internalized oppression” to dismiss anyone who disagrees with her (shown below). Additionally, Klein donated $100 to Joshi’s YouCaring page as a “moral test” to see if she would accept it.

On November 7th, 2016, h3h3productions posted a video titled “Hugh Mungus Needs Our Help,” in which he claims that Joshi accepted his $100 donation but hid his comment from her page. Additionally, he revealed that Pantoja was undergoing cancer treatments and suffering from health problems, and that he opened up a YouCaring page to help him.

The following day, YouCaring shut down both the donation pages for both Joshi and Pantoja, due to the subject matter inciting “controversy.” Also on November 8th, Ethan Klein launched a page titled “Help Hugh Mungus” on GoFundMe, which gathered upwards of $54,500 of its $10,000 goal within 16 hours (shown below). 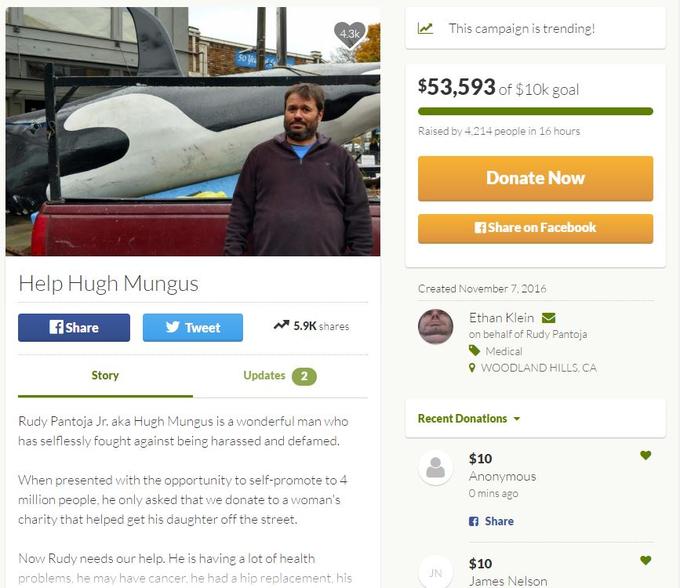 Man do I have a bad aim
🙂
Ooh a self burn! Those are rare
Makes sense to me