Charli D’Amelio is an American TikTok influencer known for her short and simple dance videos. The high schooler and competitive dancer gained almost over-night success in 2019.

In June 2019, Charli D’Amelio joined TikTok and amassed over 5.5 million followers in five months. On July 17th, she uploaded a duet dance video which gained over 236,500 likes and 12,900 shares in four months. According to a Famous Birthdays interview this is the video that launched her popularity (shown below).

On August 29th, D’Amelio announced on Twitter “in honor of hitting 100k, i will start my youtube channel. so comment questions to be featured in my first video, use hashtag #charlihit100k !!!” (shown below). Twitter users @lekent11 and @andrewyoung responded to the tweet saying that over the next few days she rose to over two million subscribers on TikTok. 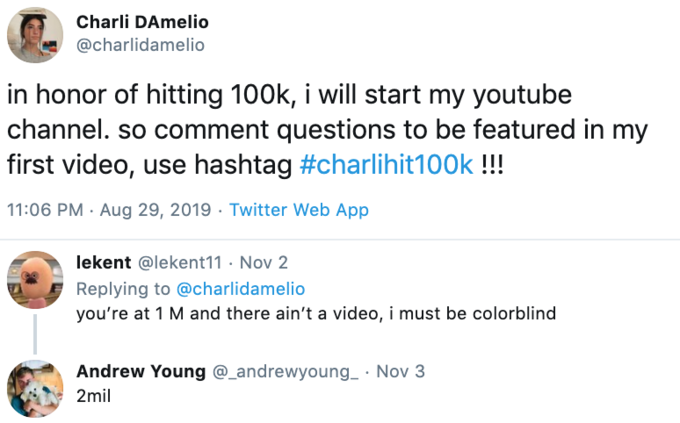 Many people began commenting on D’Amelio’s TikTok videos by saying her they don’t understand the hype surrounding her TikTok account. On October 27th, D’Amelio responded in a TikTok video saying she doesn’t understand the hype either (shown below, left). The video accumulated over 1.1 million likes and 15,200 shares in a months. Her most popular videos continue to be her dance videos. For example on November 13th, Charli D’Amelio uploaded a short dance to TikTok which received over 1.3 million likes and 37,300 shares in 10 days (shown below, right).
On November 23rd, Charli D’Amelio uploaded her first YouTube video which gained over 158,600 views and 10,000 likes in two days (shown below). The video “what happened at my meet & greet” featured D’Amelio meeting her fans in Norfolk, Connecticut and teaching them a TikTok dance.
On November 24th, 2019, Charli D’Amelio danced on stage with Bebe Rexha during a Jonas Brothers Concert (shown below).

On January 30th, 2020, Charli D’Amelio announced on her Twitter account that she would be in a Sabra Hummus commercial that will premiere during the Super Bowl (shown below). The tweet which included a short clip of the commercial in which she says OK Boomer gained over 5,700 likes and 140 retweets in a day.

Twitter user @ianrborthwick retweeted the video and captioned it with a timeline of D’Amelio’s accomplishments in the last eight months (shown below). The tweet garnered over 4,000 likes and 170 retweets in a day. 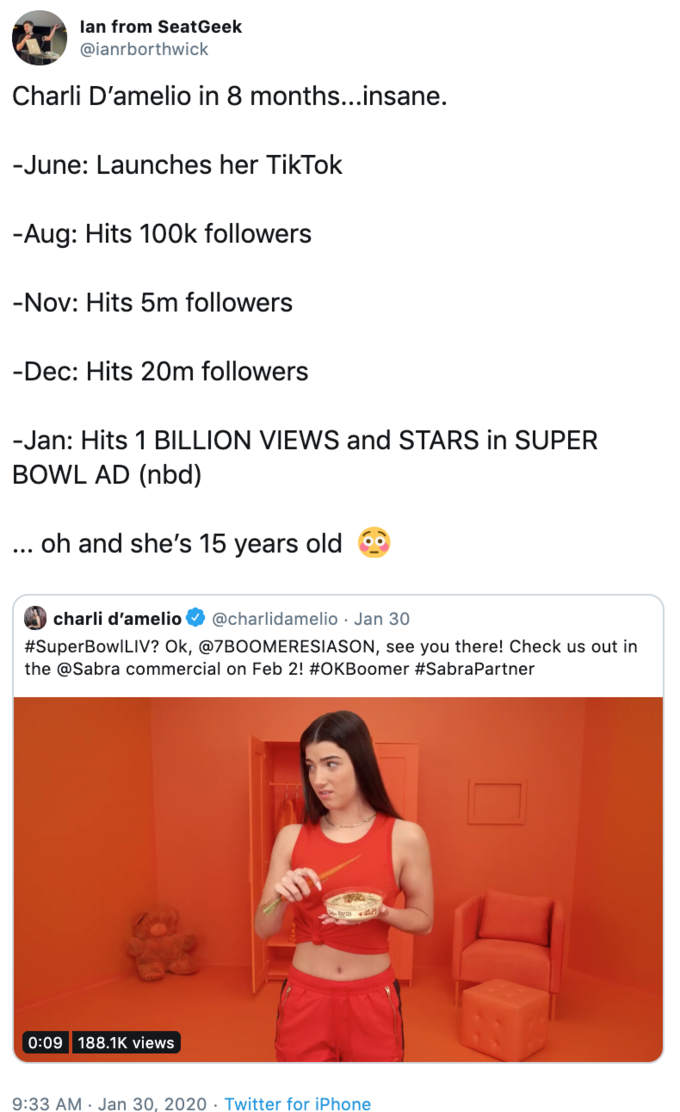 “A tik toker who got famous in less than a few weeks. She’s known to be almost every guy’s tik tok crush and has already started hanging out with famous tik tok guys like Chase Hudson. A lot of people argue over whether she’s worth the hype or not (meaning if she deserves being famous or not), and many argue that her sister is prettier and deserves more clout. A lot of guys also talk about how they can’t win No Nut November thanks to her, and to those guys: y’all are disgusting she’s 15.”

Charli D’Amelio was born May 1st, 2004 and lives in Connecticut with her mother Heidi D’Amelio, father Marc D’Amelio and sister, Dixie D’Amelio. Her father is a prominent Connecticut republican politician. She is currently in high school and dances competitively.

In November 2019, many TikTokkers began uploading videos in which they comment on Charli D’Amelio’s looks, dancing skills and hype (shown below).