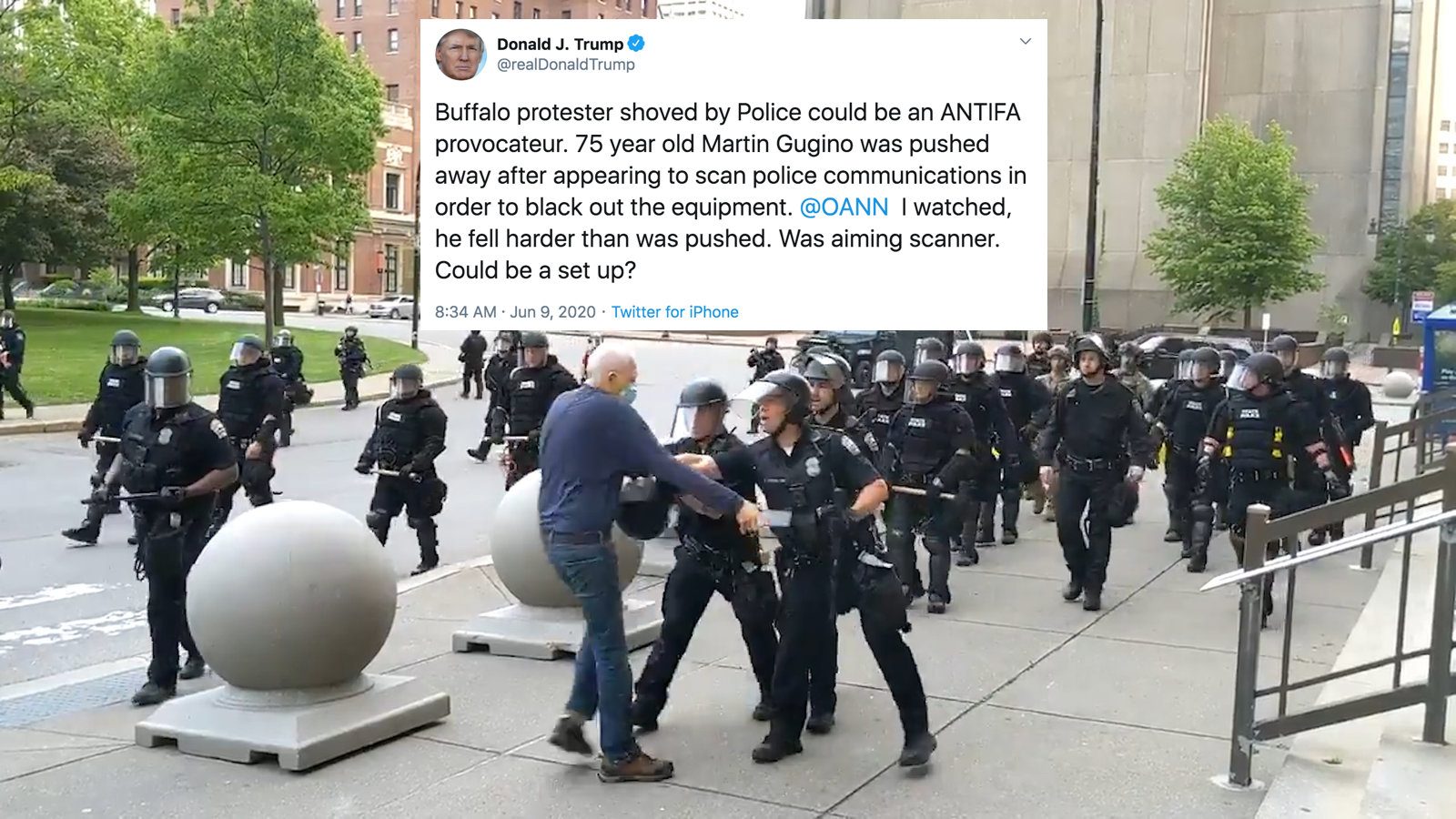 Three and a half years into his Presidency, it takes a lot for Donald Trump to rile a Twitter userbase that has gotten used to his provocative tweets and general sloganeering. This morning, however, Trump left Twitter freshly aghast when he suggested Martin Gugino, the 75-year-old man shoved to the ground by Buffalo police in a highly disturbing video from last week’s George Floyd protests, was an “Antifa provocateur,” that he “fell harder than he was pushed,” and that the whole thing “Could be a setup?”

Buffalo protester shoved by Police could be an ANTIFA provocateur. 75 year old Martin Gugino was pushed away after appearing to scan police communications in order to black out the equipment. @OANN I watched, he fell harder than was pushed. Was aiming scanner. Could be a set up?

Gugino is a member of nonprofits PUSH Buffalo, which focuses on affordable housing, and Western New York Peace Center, a human rights organization. He is also part of the Catholic Worker Movement. In the video, Gugino can be seen approaching marching police officers and attempting to talk to them. Two officers then shove him and he falls, hitting his head on the pavement. He begins bleeding out of his ears. One of the officers seems like he’s about to help him before another stops him, and the pair go on to harangue more protestors. It takes several seconds before someone in the sea of police stops to help him. Gugino was said in “stable but serious condition.” The officers, Robert McCabe and Aaron Torgalski, were charged with felony assault. In response, the city’s entire 57-member tactical team of police resigned in solidarity with the charged officers.

Trump had yet to comment on the footage until this morning, when he parroted a report from One America News Network, a far-right conservative news network that has been highly supportive of Trump throughout his Presidency. The network reported that Gugino was actually a member of Antifa and he was attempting to use a “police scanner” on his phone to scan police communications during the protest (Gugino can be seen with his phone in his hand during the video).

Here’s the first half of the batshit OANN segment Trump just tweeted. It alleges the 75 year old man assaulted by Buffalo police officers was an antifa operative, based on a report from Conservative Treehouse. pic.twitter.com/CeMVyJcoh8

For many, Trump suggesting that Gugino was an “Antifa provacateur” and his assault “could be a set up” was beyond the pale.

Still rubbing eyes at this tweet. The guy was bleeding from is ears and was hospitalized. That was…faked? https://t.co/65J2KWbwKS

Making an unarmed old man who was hospitalized by police for no reason the face of police brutality in the US is just more of Trump’s unparalleled political genius at work.

What will it take for ppl around Trump to initiate his removal? His condition is dire as he deteriorates physically & mentally from dementia. He can’t function. His symptoms include not seeing how badly he’s losing it & attemping to force-feed his fantasy world to the public. pic.twitter.com/rxjuquVMgD

#MartinGugino is a peace activist and volunteer with the Catholic Worker movement. Why spread rumors about someone who embodies the Beatitudes? In case you’ve forgotten what’s in the Bible you were carrying, Jesus said, “Blessed are the peacemakers,” not the rumormongers. https://t.co/LMEAO16LvQ