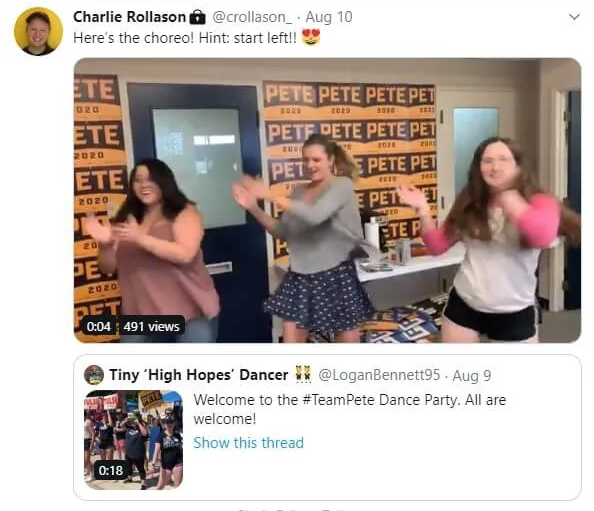 If the song “High Hopes” has been stuck in your head for the last two months, you might have one of Mayor Pete Buttigieg’s interns to blame. According to an investigation by The Daily Dot, a University of Chicago student choreographed the viral cheer.

Set to Panic! at the Disco’s “High Hopes,” the dance, which has been the subject of much criticism and praise, alike, has been used in expressions of solidarity among supporters of Mayor Pete Buttigieg’s presidential campaign. Thanks to some uncovered tweets, the Daily Dot reports that one of Mayor Pete’s interns, Charlie Rollason, choreographed the moves. 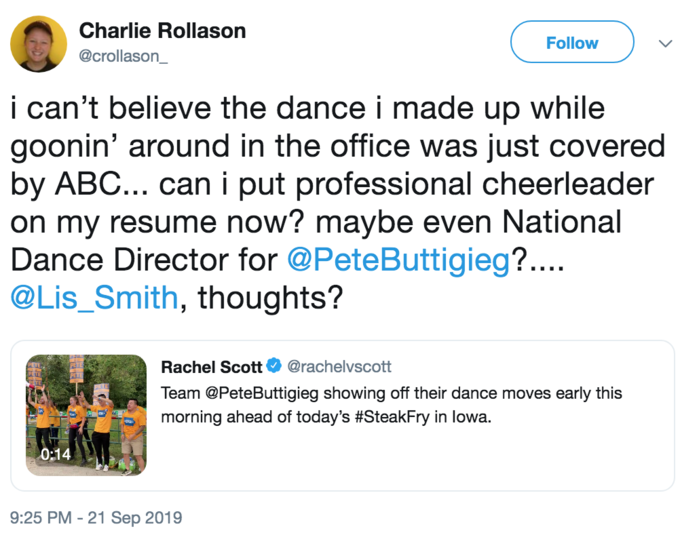 In a series of since-protected tweets, Rollason takes credit for the dance. However, some mentions of public admiration for the dance also credit her.

This dance continues to bring so much joy to our staff and supporters. Thanks for the moves @crollason_! 💛💙 https://t.co/wb9YQqYd1c

Some even referred to the dance by its supposed original name the “Wing Ding” dance.

@crollason_ everyone was doing your inspired Wing Ding dance routine today! Aren’t you proud of your creation!! Miss you! #WinTheEra https://t.co/7Y6oJkjuI4

Others co-opted the dance to advocate for other candidates, like Bernie Sanders.

Regardless of how one feels about Mayor Pete or the dance, we can certainly agree that “High Hopes” has certainly made a comeback thanks to the dance. As of this time, though, Mayor Pete has yet to comment on the infestation of earworms his team has set forth upon the country.
Source