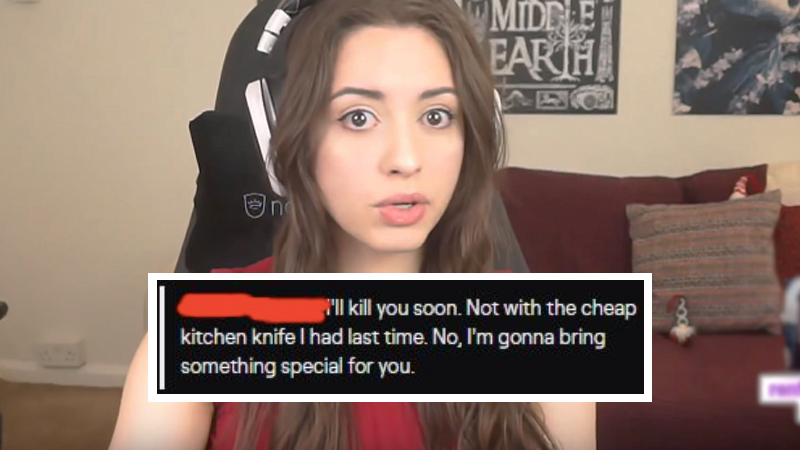 Last year, British Twitch streamer Sweet Anita reported that a stalker had moved to her town, slept outside of her home and assaulted her with a knife before eventually being detained by police. Despite this incident, police ultimately released him with only a “caution,” and Anita has since stated that the stalker continues to plague her. Just last week, Anita posted a series of tweets recounting her stalker’s actions, which included sending her graphic death threats.

In one of these tweets, Anita posted a screenshot of one of his comments during a recent stream, where he said, “I’ll kill you soon. Not with the cheap kitchen knife I had last time.”

He stated this publicly last stream. Last time he left messages like this he sat outside my house waiting for me to come out all day, then followed me to a shop. When I asked if he was armed he silently smirked and then chased me. Two men had to grab him so that I could escape. pic.twitter.com/AK8HZpJoTs

Even with these latest death threats, Anita said she’s had little help from police regarding the stalker’s latest actions. In a separate tweet, she recalled her experience with reporting the threats to local law enforcement but stated that they merely advised her to lock her doors and call emergency services if he showed up again.

“Neither knew what Doxing is, that it is a crime, or what live streaming is. It would appear that no further action is being taken,” she said. “I have to wait for him to harm me again before they will take action.”

According to her statements, when the police recently came to her home to speak with her about the matter, they asked her why she hadn’t stopped or given up her career as a streamer since it was the source of the stalker. “The officers who came also asked why I didn’t just quit making content. We all get stalkers,” she said. “The problem is not content creators it’s stalkers. I was thinking SURE I’ll just quit and take up telesales or work in a nursery. That’ll work with Tourettes.”

Anita continued her tweets and added that she feels helpless without any support from the police, who she said wasn’t actively involved in the case despite her reports to them about the stalker’s recent uptick in activity. “No matter how extreme the situation, the response has always been the same. They log it and do nothing, and I feel helpless.”

Fans and other streamers joined in on the Twitter conversation, offering help or advice to try and find a solution, but most of them simply agreed that the police needed to get more involved and “do their jobs.”

@MetCC Please contact her to know her location and tell her local police to actually do their job. This stalker has broken a restraining order. Her local police is waiting for something worse to happen this is UNACCEPTABLE

YouTuber ASMR Glow was one such user, who tagged the London Metro Police account in her tweet and said, “Please contact her to know her location and tell her local police to actually do their job. Her local police is waiting for something worse to happen this is UNACCEPTABLE.”

Anita expressed a harrowing thought in her desperation regarding the prevalence of similar types of issues in the streaming industry. “If anything happens to me, I really hope that I’m the last canary in the coal mine. The law needs to change. No job should have such a high risk of rape, assault or death, especially not live streaming,” she said, before adding, “I wonder whether he’ll kill me before anyone takes this seriously.”

It honestly feels as though there is nothing to be done. pic.twitter.com/LrTrNxS5dG

you weren't supposed to do that
Shirley Curry, AKA "Skyrim Grandma," Scales Back On Streaming Due To Health Concerns
i spelled it right
accurate.