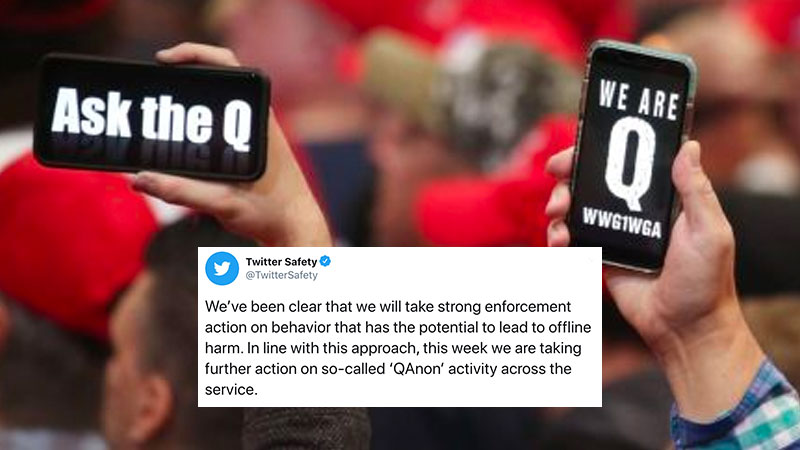 The QAnon slogan “Where We Go One, We Go All” now has a very different meaning on Twitter.

In a sweeping overhaul of its response to followers of the unsubstantiated conspiracy theory QAnon, Twitter banned 7,000 accounts dedicated to Q in recent weeks. The company vows to ramp up enforcement of fellow Q accounts and posts, as well as limit their reach, both in search and trending topics. A spokesperson for Twitter said that the move would ultimately affect more than 150,000 accounts.

Over the last few months, Qanon’s presence both on the platform and in society exploded with popularity. In addition to the numerous congressional candidates that openly claim to follow the conspiracy, as well as many others sharing Qanon-related content, Q’s acolytes have built a massive community on social media and message boards, including Facebook, YouTube and Reddit. This is the first time Twitter has taken action against the group.

We’ve been clear that we will take strong enforcement action on behavior that has the potential to lead to offline harm. In line with this approach, this week we are taking further action on so-called ‘QAnon’ activity across the service.

In the weeks leading up to the announcement, Twitter removed more than 7,000 Qanon accounts. According to the company’s spokesperson, these accounts violated rules on targeted harassment, such as by employing the coordinated “swarming” techniques against critics of the conspiracy theory or whoever happens to fall into its sights. Qanon, which posits the baseless claim that a Trump-world insider is leaving tips, known as “breadcrumbs,” for followers about Trump’s fight against the so-called deep state, which is helping to prop up and international Satanic pedophile ring run by a cabal of rich and powerful people. Public people, usually Hollywood celebrities and liberal politicians, that fall in Q’s crosshairs find themselves overrun by Qanon supporters, who accuse their targets of violent sex crimes.

Twitter is also attempting to quell the spread and dissemination of Qanon-related materials, focusing their efforts on the growth of the conspiracy theory, not just violators of the site’s rules. The ban also focuses on platform manipulation, such as using multiple accounts to outrun the clampdown, as well as blocking links to Qanon websites.

In addition, we will:

Twitter’s crackdown comes nearly two years after the conspiracy theory launched on 4chan. Since October 2018, when the first “breadcrumbs” dropped, Twitter has been overrun with coordinated campaigns to make the theory reach the platform’s trending pages. In the last few months, NBC notes, “QAnon campaigns pushed fringe hashtags like #Obamagate and #SubpoenaObama into trending topics that Trump ultimately promoted.”

In the past, Facebook and Reddit both took stands against the conspiracy theory’s spread. In May, Facebook removing numerous accounts. In 2018, Reddit banned the QAnon-related subreddit /r/thegreatawakening. However, the social media bans have not stopped Q’s spread IRL. Qanon shirts, posters and supporters have been staples of public demonstrations and Trump rallies. Earlier this month, former National Security Adviser Michael Flynn took the Q oath in a video he posted to Twitter.