Bon Appetit Racism Controversy refers to a series of events leading to the restructuring of the American magazine company Bon Appetit and their video production. In June 2020, following the George Floyd Protests, Editor-in-chief Adam Rapoport resigned after a photo of himself in brownface resurfaced and editor Sohla El-Waylly released a statement accusing the company of paying POCs unfair wages.

On May 31st, 2020, Bon Appétit’s editor in chief Adam Rapoport published an article called “Food Has Always Been Political” regarding how the company plans to address “the nationwide uprisings.” On June 8th, Twitter user @tammieetc posted a screenshot of Rapoport in brownface during a Halloween party taken from his Instagram account which has since been deleted. The tweet, captioned “I do not know why Adam Rapoport simply doesn’t write about Puerto Rican food for @bonappetit himself!!!” gained over 2,200 likes and 790 retweets in four days (shown below). 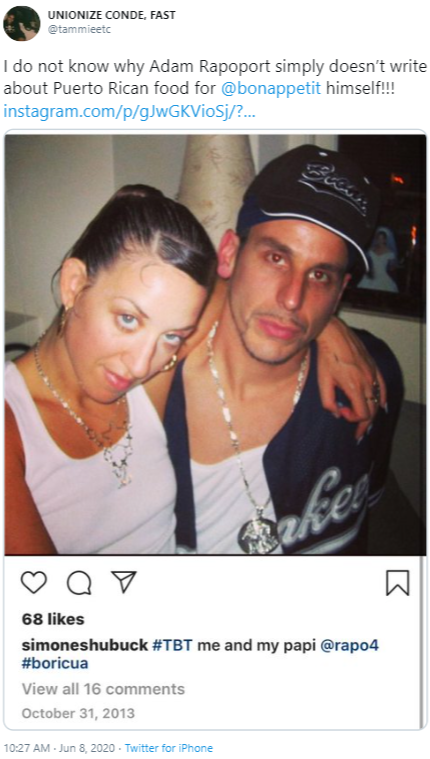 “I’ve been at Bon Appetit for 10 months. I am 35 years old and have over 15 years of professional experience. I was hired as an assistant editor at $50k to assist mostly white editors ith significantly less experience than me. I’ve been pushed in front of video as a display of diversity. In reality, currently, only white editors are paid for their video appearances. None of the people of color have been compensated”

Twitter user @emdwu reposted the statement and earned over 51,20 likes and 20,600 retweets in five days (shown below, left). That same day, Twitter user @nerfbabydva posted screenshots from Brad Leone’s Instagram stories which said that he would not be making any more videos until his “employer addresses these issues that have been ignored” (shown below, right). 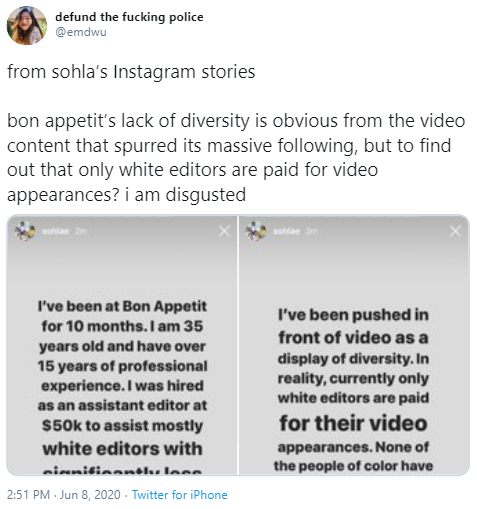 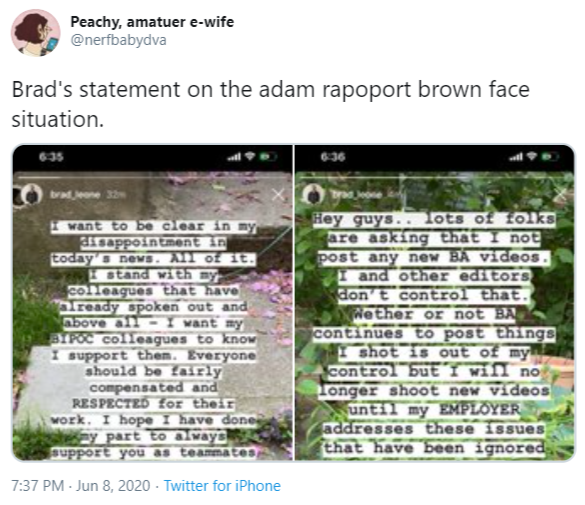 That evening, according to Daily Dot, Adam Rapoport posted to Instagram saying

“I am stepping down as editor-in-chief of Bon Appétit to reflect on the work that I need to do as a human being and to allow Bon Appétit to get to a better place. From an extremely ill-conceived Halloween costume 16 years ago to my blind spot as an editor, I’ve not championed an inclusive vision. And ultimately, It’s been at the expense of Bon Appétit and it’s staff, as well as our readers. They all deserve better” (shown below, left).

On June 10th, Instagram account bonappetitmag posted a message from the Bon Appétit and Epicurious staff addressing the situation and garnered over 180,140 likes in three days (shown below, right). 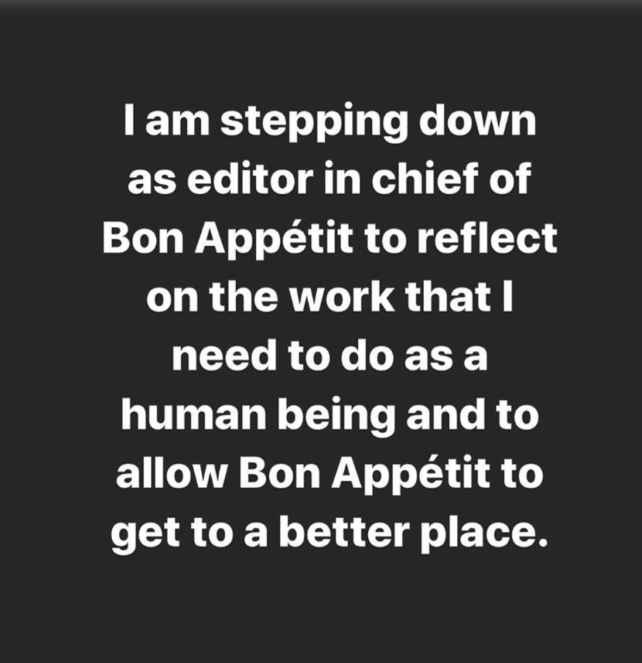 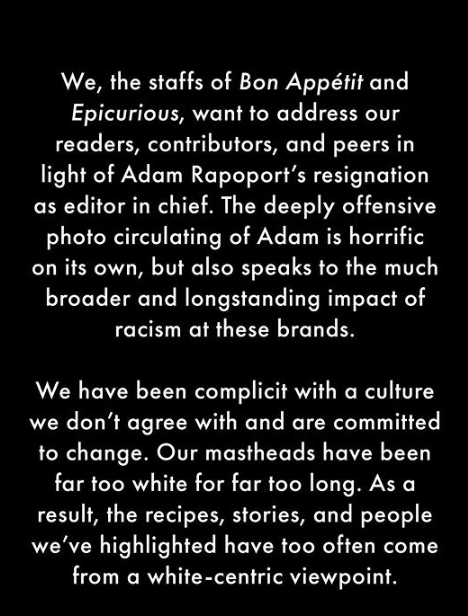 On June 10th, 2020, Twitter user @s_whip_ posted a video with the caption, “the fact that sohla was hired at bon appetit for $50K/year and doesn’t get paid for video appearances like her white colleagues is digusting. anyways here’s a montage of her cooking circles around everyone at ba” (shown below). The video accumulated over 134,100 likes and 43,500 retweets in three days.

the fact that sohla was hired at bon appetit for $50K/year and doesn’t get paid for video appearances like her white colleagues is digusting. anyways here’s a montage of her cooking circles around everyone at ba pic.twitter.com/uzZsRMGIwf

On June 11th, 2020, Bon Appetit editors continued to respond in support of El-Waylly, including Christina Chaey and Claire Saffitz who garnered over 132,700 likes and 214,100 likes respectively for their statements made on Instagram (shown below). Variety and New York Times published articles regarding the controversy. 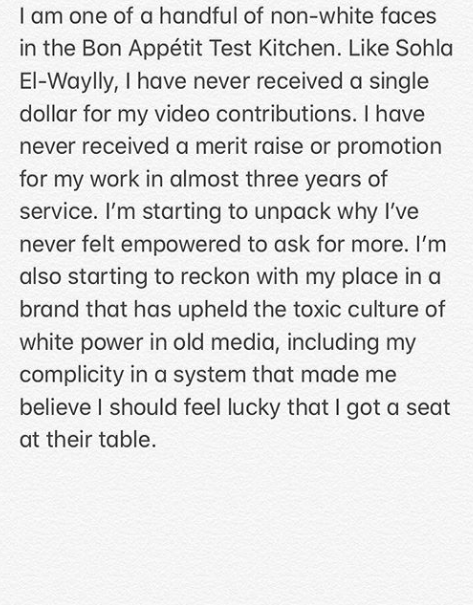 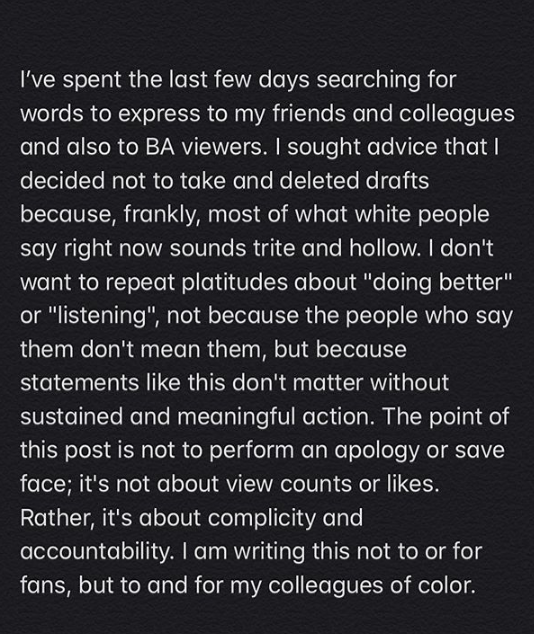 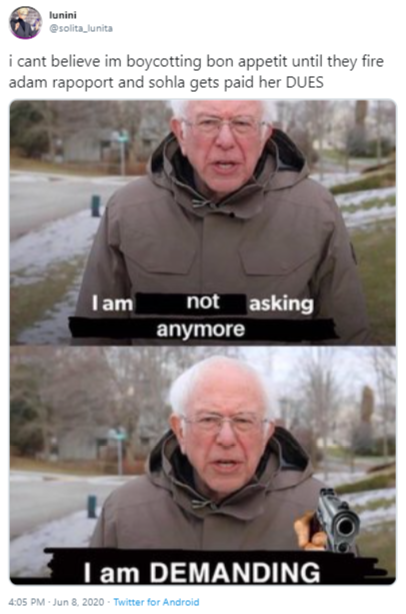 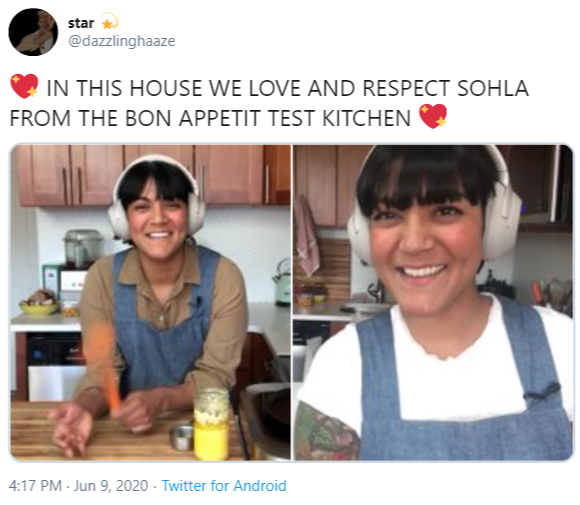 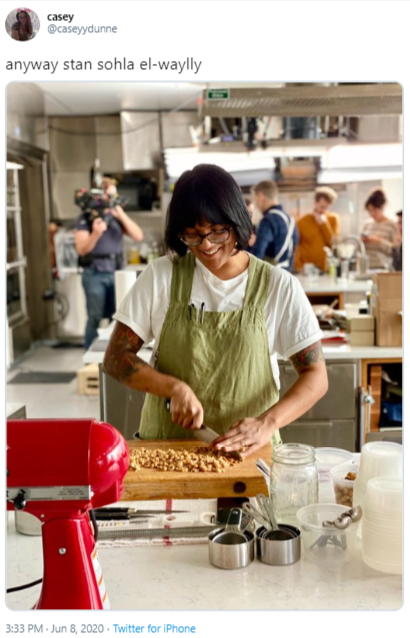 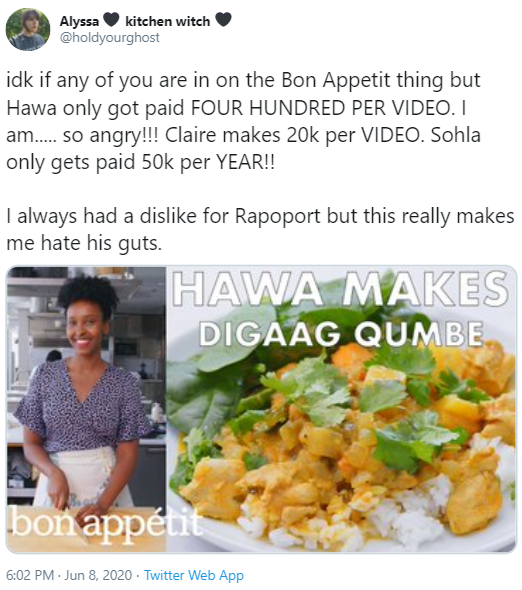 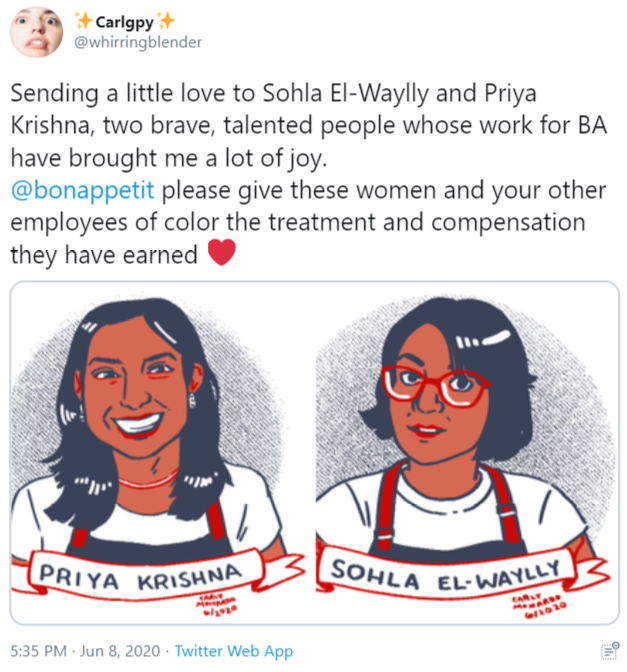 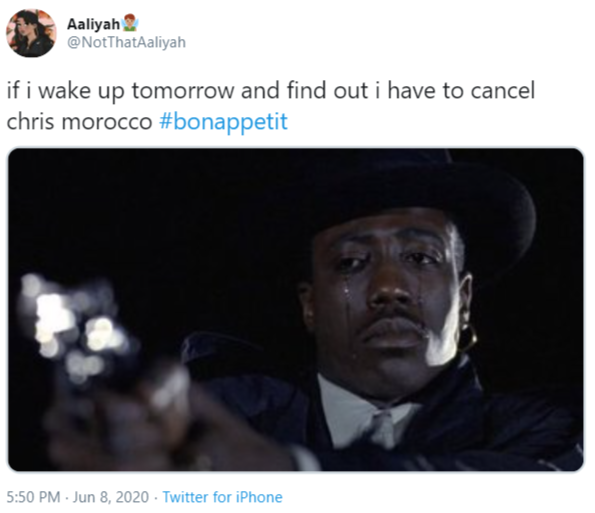