Jessica Krug Racial Identity Controversy refers to an online backlash directed toward George Washington University associate professor Jessica A. Krug, who confessed in a post on Medium that she pretended to be Black and Latina even though she was a white woman. After the post was published in early September 2020, it was widely circulated across Twitter, Reddit and other social media platforms, with many comparing her the Rachel Dolezal.

On September 3rd, 2020, Krug published an article on Medium titled “The Truth, and the Anti-Black Violence of My Lies,” in which she confessed that she grew up “a white Jewish child in suburban Kansas City” but had falsely adopted a Black identity, referring to herself “a culture leech.” Additionally, Krug claims to believe in “cancel culture”:

On September 3rd, 2020, Redditor HadakaApron submitted a YouTube upload of a Zoom call in which Krug speaks to the NYC City Council to /r/stupidpol (shown below). In the video, Krug identifies herself as “Jess La Bombalera” and speaks in a fake accent.

Meanwhile, Huffington Post editor Philip Lewis tweeted about controversy, referring to it as the “weird story of the day” (shown below, left). Shortly after, Huffington Post reporter Ja’han Jones tweeted that he had matched witch Krug “a couple years back” on Tinder and that she criticized him “for not caring about Black people enough” (shown below, right). 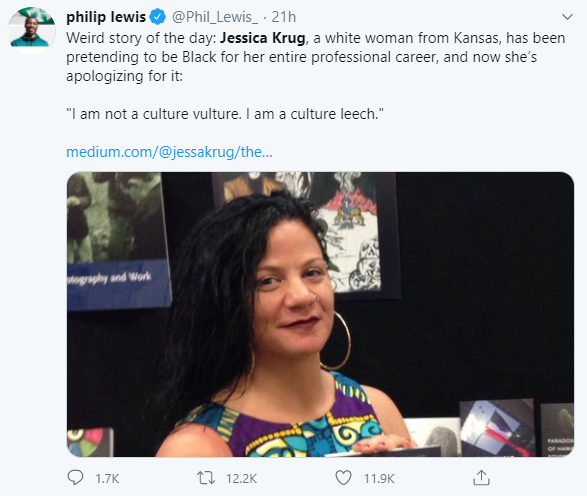 Meanwhile, Twitter user @LenaHaime posted several tweets about Krug, claiming that she had complained about a white woman winning an award over her as an example of “how Black scholars are often overlooked in the academy (shown below). 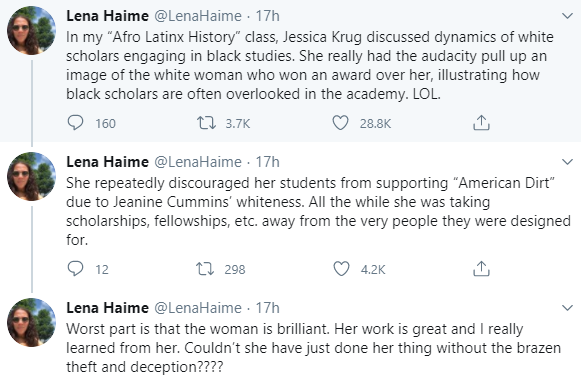 Memes, Ah some memes
This Is So Sad
The Mask Has Been Smokin' For More Than 30 Years
An Old Taylor Swift Song Is Trending On TikTok