You’re Going to Brazil refers to a series of GIF captions where a subject is taken to Brazil against their will, with the person vocally protesting being taken to the country. Spawned on iFunny in May 2020, the format gained further spread on Twitter and Reddit in June 2020.

On May 6th, 2020, iFunny user ecrs uploaded a point of view GIF of a person falling into a pit, captioned “NOOO I DON’T WANNA GO TO BRAZIL NOOO STOP AHHH,” suggesting that Brazil is an undesirable place to be (shown below, left). The GIF caption gained over 1,800 smiles and 50 comments in two months. On May 8th, iFunny user Hotfix posted a reverse joke in Brazilian Portuguese that gained over 100 smiles in two months (shown below, right).

Around the same time as the GIF caption was posted, in early May 2020, a drastic rise in coronavirus cases in Brazil was reported, although there is no hard evidence for any relationship between the meme and that data.

On May 29th, iFunny user ecrs posted a GIF of a car being lifted by a truck’s robotic arm with the caption “You’re going to Brazil,” gaining 6 likes in a month (shown below). On June 1st, Tenor user pirate_ uploaded the GIF to the site. On June 19th Instagram user honeynut.woomy reposted the GIF, gaining more than 90,000 views in two weeks.

The meme gained further spread in early June 2020, with GIF captions spreading from iFunny to Instagram, Discord, /r/okbuddyretard subreddit and other sites and communities.

On May 29th, iFunny user VideoGameSymphony posted a GIF caption insulting Brazil that received 75 smiles in a month (shown below, left). On June 9th, Redditor u/CansOfSpaghetti posted an image macro showing a hole with the caption “HOW TO GO TO BRAZIL” to r/okbuddyretard, gaining over 2,700 upvotes in one month (shown below, right). 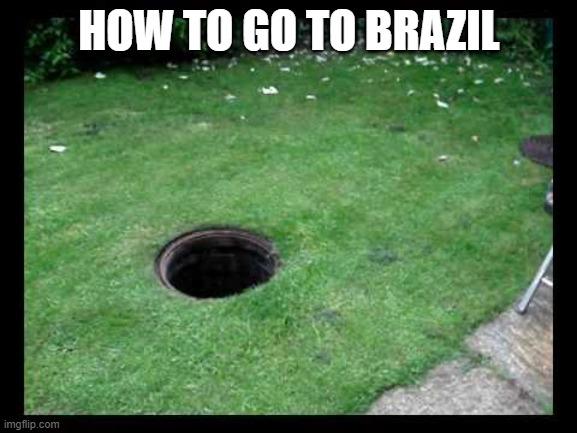 On June 16, novelty Twitter account OutOfContextEverything tweeted a GIF of a group of Ugandan Knuckles dragging Baldi from Baldi’s Basics in Education and Learning into a Minecraft fireplace with the caption, gaining over 3,000 retweets and 500 retweets in four weeks (shown below).

In addition to memes about Brazil, the format mutated to include other countries such as Turkey and Romania.

You’re Going to Brazil is preceded by Come to Brazil, an expression associated with Brazilian internet users requesting celebrities to visit their country. It has been in use on the internet since at least 2008.

Love Him Or Hate Him, Rapper Mario Is Spittin Facts
Pete Buttigieg's New Haircut Gets Dragged On Twitter
well...
They're done upstairs, thanks for scrolling the previous post