Content Cop is a satirical web series in which iDubbbz offers his criticism and review of popular channels and content creators on YouTube. Each episode of Content Cop opens with a comedy sketch of iDubbbz dressed in a police uniform chasing after and bringing down a suspect, before cutting to iDubbbz’ production studio where he rants about the YouTube content creator in question at length. Between 2015 and 2017, iDubbbz produced 11 content cop episodes, including notable episodes on YouTubers LeafyIsHere, KEEMSTAR and RiceGum.

On December 13th, 2015, YouTuber iDubbbz uploaded the first episode of his series Content Cop titled “AMATEUR FOOD REVIEWERS.” In the video and the episodes that followed, iDubbbz reviewed and critisized YouTubers whose videos or actions he deemed hypocritical or unethical. In the period between December 13th, 2015 and October 3rd, 2017, iDubbbz produced a total of eleven Content Cop episodes, including episodes on YouTubers The Fine Bros, KEEMSTAR, LeafyIsHere, Tana Mongeau and RiceGum.

Content Deputy are subseries produced by iDubbbz in responce to those YouTubers who reacted to his Content Cop videos. The subseries include a total of two episodes and include videos recorded in response to LeafyIsHere and RiceGum.

Over the years, the Content Cop episodes resulted into a number major controversies and feuds involving iDubbbz.

On September 12th, 2016, YouTuber iDubbbz released a new episode of Content Cop criticizing Leafy’s videos and referring to him as a bully. Additionally, iDubbbz frequently mocks Leafy’s chin for being small, pointing out that he appears to be trying to hide the part of his face when posing for photographs. After the video was released, many internet users mocked the size of Leafy’s chin with the hashtag #nochin. That day, YouTuber Keemstar uploaded a video reporting on the video on the DramaAlert channel (shown below).

Tana Mongeau Feud refers to an online feud between iDubbz and YouTube vlogger Tana Mongeau which took off after iDubbbz staged wherein he traveled to San Francisco to attend a VIP meet-and-greet event with Mongeau, during which he approached the celebrity vlogger for a photograph and blurted out “say nigger!” Following the meet and greet, Mongeau made accusatory posts against iDubbbz on social media. The feud continued with Mongeau being exposed of using the slur on previous occasions, and with iDubbz releasing a Content Cop episode criticizing Mongeau’s video for exaggerating their encounter in San Francisco.

RiceGum and iDubbbz Feud refers to the October 2017 feud between iDubbbz and RiceGum. The feud took off after iDubbbz posted a Content Cop episode about the YouTuber, in which he accused RiceGum of being a pompous, lying and unethical braggart. In the Following days, RiceGum posted a response video, with iDubbbz later answering with a Content Deputy episode.

On November 11th, 2019, iDubbbz tweeted that YouTube removed the Content Cop episode on LeafyIsHere due to violation of YouTube guidelines (tweet shown below).[] The removal followed November 7th, 2019, removal of viral Filthy Frank video “Vomit Cake.”[] The removal of the Content Cop video was made in accordance with YouTube anti-harassment policy changes which were promised by the company after the #VoxAdpocalypse and went into effect on December 11th. 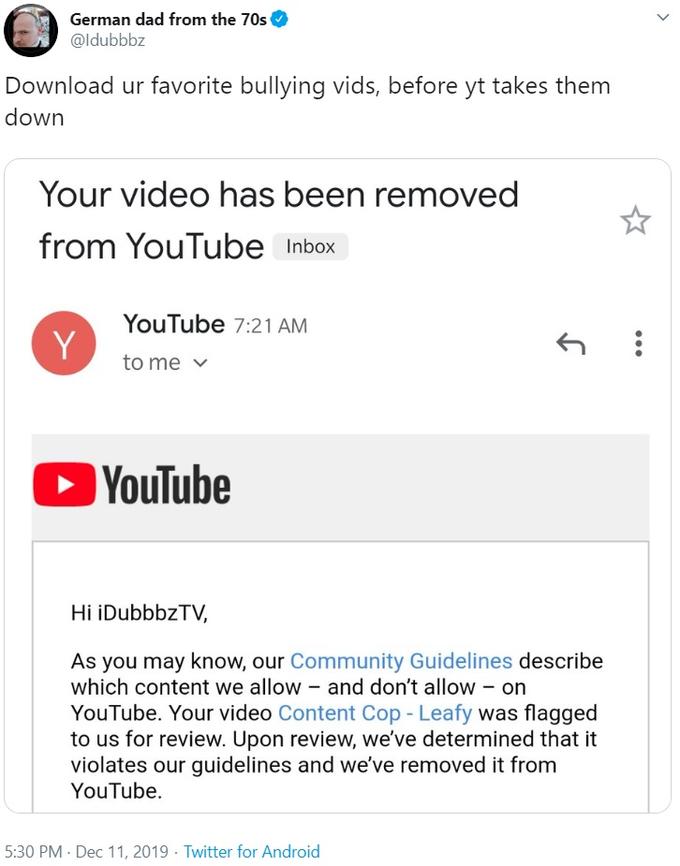 In the following days, the removal became the subject of discussions online. On December 11th, Reclaim the Net published an article about the video being removed, pointing out that the rules were applied retroactively.[] On the same day, Redditor B-VOLLEYBALL-READY linked the article to /r/KotakuInAction, gaining over 240 upvotes. Also on December 11th, YouTubers Keemstar and Eddy Burback commented on the issue, criticizing YouTube (tweets shown below). 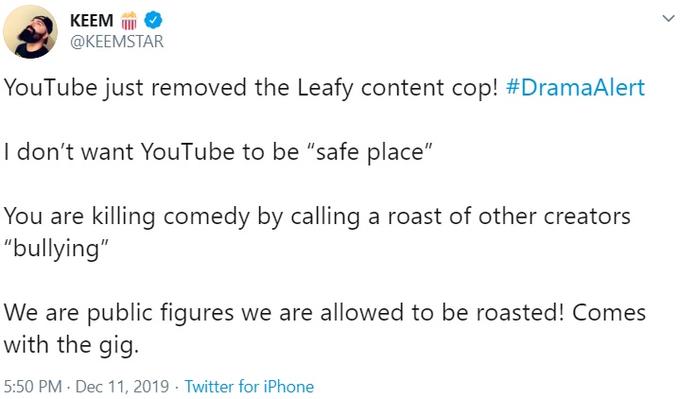 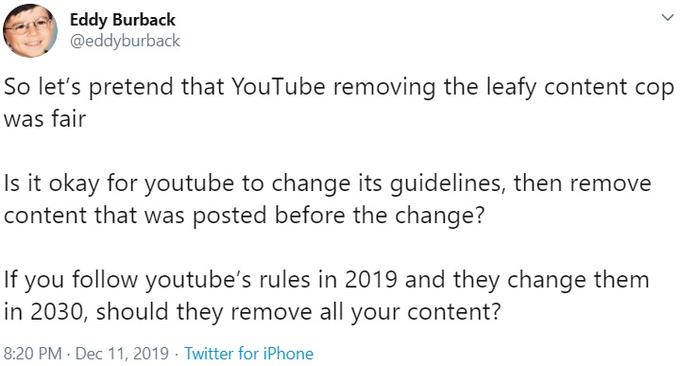 You is new for here?
Sad ocean noises
Anime Memers Relate To Nao Tomori's Exasperation At A Melon
LOL