Lohanthony is the handle of YouTuber Anthony Quintal. Quintal attracted a large following on YouTube and Vine throughout the 2010s, garnering attention for being an openly and proudly gay teenager. However, after returning to YouTube in 2020, he had deleted all of his videos, denounced his sexuality, and said that he would be practicing “Christian celibacy,” raising concerns from his fans.

Quintal is a Massachusetts-born YouTuber who began posting videos onto his channel on January 13th, 2012. One of his most popular videos, titled “Calling All The Basic Bitches,” features him swinging his leg (mirror shown below, left). The segment was included in an episode of Tosh.0 (shown below, right)..

Over the course of the 2010s, Quintal made a presence on YouTube and Vine being an openly gay teenager. (Vine compilation shown below, left). He has appeared in videos with high-profile content creators including Rebecca Black and RuPaul (shown below, right).
Quintal was particularly popular in the middle of the decade, receiving news coverage from publications including People, New York Magazine and Tubefilter. He was nominated for two awards at the 2014 Teen Choice Awards for his web content. He had over 1.3 million subscribers before deleting all videos and his subscriber count from his channel in 2020.

The sudden shift in Quintal’s content made fans concerned that perhaps he had undergone conversion therapy or was otherwise undergoing some sort of mental duress. User @P1nkP0w3r tweeted, “i’m so concerned for lohanthony. it sounds like he’s blaming himself for getting molested as a child. it sounds like he’s blaming getting molested as to why he’s gay. this is concerning as fuck. idc that he’s christian cause i want him to live his mf life but this is concerning,” gaining over 240 retweets and 2,600 likes (shown below, left). User @silicone tweeted, “I genuinely feel bad for lohanthony but the message he sent on his YouTube channel about sexuality is so damaging. you couldn’t find love in a gay relationship because you were hurt from trauma and obviously have not healed fully from it & using god to cope with that experience.” 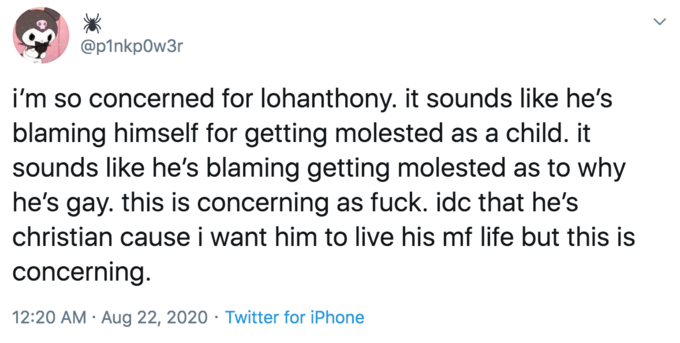 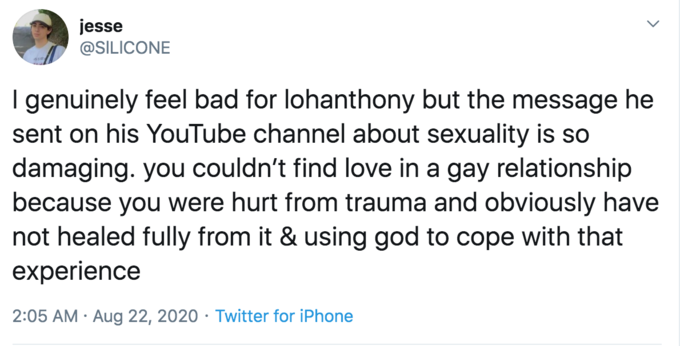 then what do u support?? his acting career??
Twitter Users Not Onboard For Chance the Rapper's Endorsement Of Kanye For President
dong and ball torture
Memers Lean On Peter Griffin When Someone Says Their Catchphrase